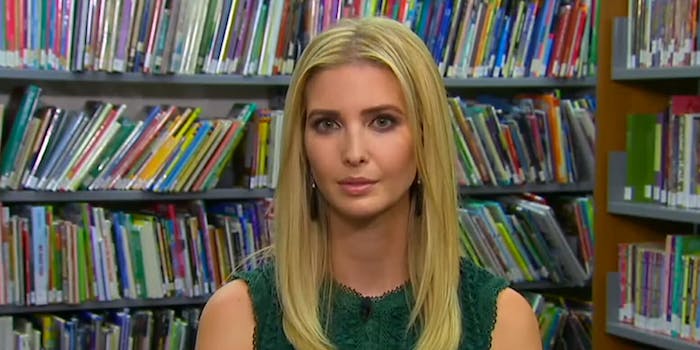 She made the remarks in an interview with Fox News.

Ivanka Trump, the daughter of President Donald Trump, pushed back at proposals made by some Democrats in an interview.

The president’s daughter made the remarks in a clip of an interview with Fox News. She was asked about the “Green New Deal,” a proposal spearheaded by Rep. Alexandria Ocasio-Cortez (D-N.Y.) and other lawmakers.

The Green New Deal includes a jobs guarantee, which is where Trump made her biggest criticism.

“I don’t think most Americans, in their heart, want to be given something,” she said. “I’ve spent a lot of time traveling around this country over the last four years. People want to work for what they get. So, I think that this idea of a guaranteed minimum is not something most people want. They want the ability to be able to secure a job. They want the ability to live in a country where’s there’s the potential for upward mobility.”

The Fox News host also asked her about the 2020 election and the difference between her father’s policies and some of the ideas being floated by Democrats.

Unsurprisingly, Trump touted the policies of the president.

“I think fundamentally, if you ask yourself the question ‘are we better off today than we were yesterday? Or we were two years ago? The answer is undoubtedly yes,” she said. “So, as an American, families sitting down and they’re thinking about their financial situation relative to a month ago, a year ago. America is doing very well, and it stands in quite sharp contrast to the rest of the world. So, not only are we doing well, much of the world has slowed down in terms of the pace of their growth. And our policies are continuing to allow this economy to thrive.”

You can read more about the interview with Fox News here.