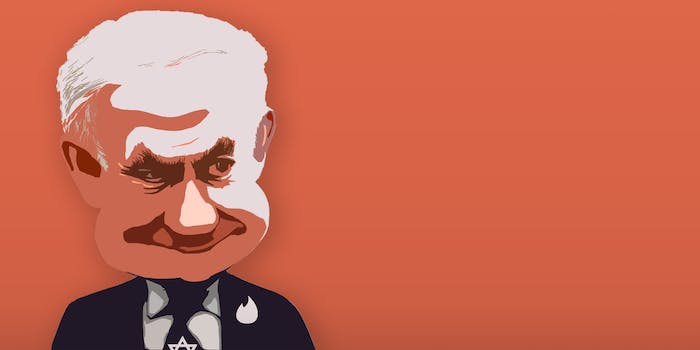 To silence critics of the Israeli bombing campaign in Gaza and curry public support for the IDF, an unknown Israeli government official is using a rather unorthodox platform: Tinder.

According to the Nation, Israeli Tinder users have been getting matched up with “Israel,” a gender-neutral Tinder user who says he/she/ze is 34. (Actually, Israel is technically 66 years old, but he/she/ze is far from the only person to have lied about their age on a dating app). Israel’s profile consists of the following images, accompanied by factoids meant to justify the bombing campaign: 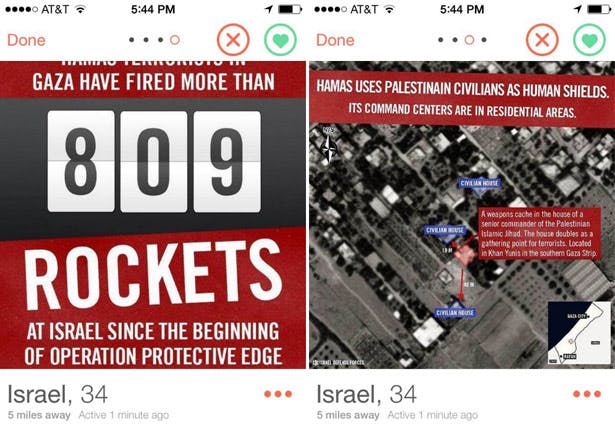 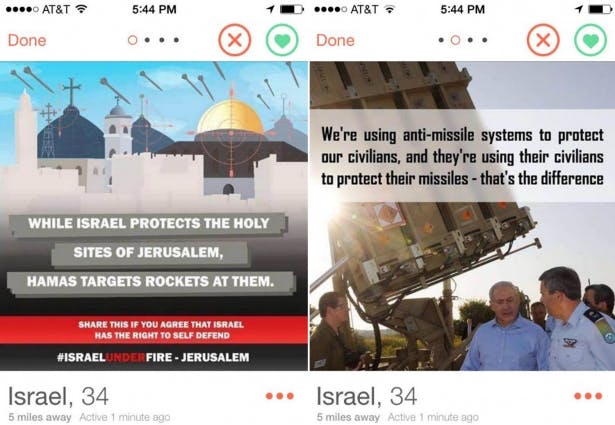 Screengrabs via The Nation

Assuming Israeli Prime Minister Benjamin Netanyahu hasn’t started trolling hookup apps for kicks—although it wouldn’t be the first time he’d have to explain away an embarrassing social media snafu—it’s unclear who the author of Israel’s Tinder profile is.

Because many of the images have been posted via #IsraelUnderFire, a Facebook Page that provides “live updates about attacks on Israel by people who deny Israel’s right to exist,” the Nation’s Eli Clifton speculates that the author is Yair Eddie Fraiman, the admin of the page who’s also a city council member and the “Director of Interactive Media & Public Diplomacy at Office of the Prime Minister of Israel,” according to LinkedIn.

Of course, this isn’t the first time that someone has used Tinder as a platform for a social or political awareness campaign. Nor is it the first social app to play a part in the current ongoing conflict, with the Yo app being used to warn Israelis of incoming missile strikes from Gaza.

But given Tinder’s intended purpose, and given that a reported 209 Palestinians have been killed and 1,560 injured since the fighting began nine days ago, “Israel’s” presence on the hookup app is far more ominous.


H/T The Nation | Photo via donkeyhotey/Flickr (CC By 2.0) | Remix by Fernando Alfonso III