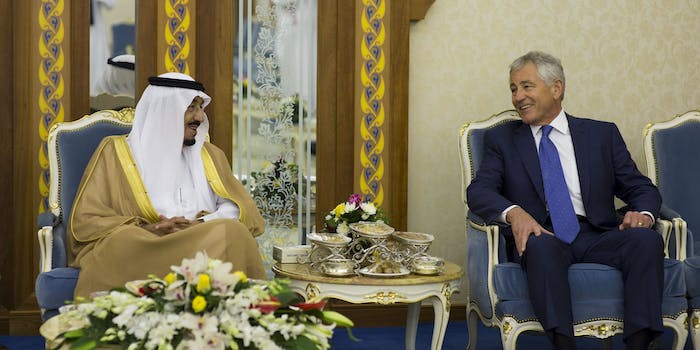 Somebody tell IS that not everything is about them.

Everyone uses Twitter to make every topic about him- or herself, and the terrorist group Islamic State (IS) is no exception.

On Monday morning, U.S. Secretary of Defense Chuck Hagel announced that he was resigning. Sources told the New York Times that the resignation was due in part to Hagel’s repeated clashes with the Obama administration over how to confront IS. In a jihadist version of Twitter’s “about.me” vanity joke, IS terrorists tried to take ownership of the news with a celebratory hashtag.

@News_Umaa, which uses the IS flag as its background image, tweeted that Obama was a “mule of the Jews,” a common IS catchphrase, alongside the anti-Hagel hashtag.

@IS_Citizen warned Obama not to look for a cure, claiming instead that “there is no cure.” It’s not clear that Obama got the message, though—IS_Citizen isn’t among the nearly 650,000 people that @barackobama follows.

@abu_mariam7, who listed his location as the Caliphate State of Iraq (IS’s goal is to unite parts of Iraq and Syria under an old-fashioned caliphate), simply tweeted the hashtag with the joyfully crying emoji, alongside a photo of Hagel looking sad.

As Vox notes, IS probably shouldn’t mock Hagel too much—under his and the president’s leadership, U.S. airstrikes have significantly curtailed IS’ core operations in the Middle East. Whoever succeeds Hagel is likely to ramp up these and other operations to continue wearing down the jihadist forces.

Photo via Secretary of Defense/Flickr (CC BY 2.0)