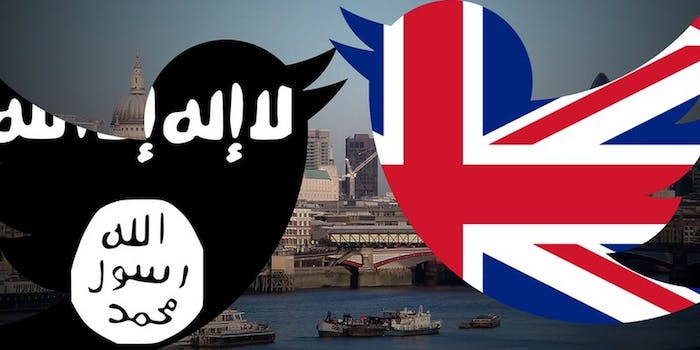 Britain's going on the offensive.

The British government may launch a social media counter-offensive in an effort to stop U.K. citizens from joining terrorist groups in the Middle East.

A former senior minister has urged the British government to “staunch the flow” of British Muslims joining Islamic State (the militant group formerly known as ISIS), and for the authorities to step up the fight against IS on social media, in the aftermath of the murder of American photojournalist James Foley by an apparently British Islamist fighter.

Speaking to Radio 4’s Today Program on August 21, Baroness Neville-Jones—a former Coalition security and counter-terrorism minister—called upon the British government to do more to combat the risk of British citizens traveling to Iraq and Syria to join Islamist insurgent movements. The Guardian reports that as many as 500 British militants are currently in the two countries.

IS operates a powerful, slick, digital operation to get their message out: The video of Foley’s execution was originally released to YouTube, sparking immediate uproar, and the Islamist group recruits widely through social media.

Neville-Jones’ comments reflect this, as she argued that the U.K. government needs to find a way of “communicating with these young people who are tempted to go, in language and in ways they are going to respond to.” A key way in which this could be done is by funding organizations and groups capable of challenging Islamic State online in a social media counter-offensive.

“We have to use the social media as a means of counter-messaging,” the National Security Strategy Joint Committee member said. “That is something government can’t directly do—but it can fund those who can do it. It does need to be done.”

There are “very promising” early pilot projects in place, Neville-Jones said, but they “[need] to be forwarded and accelerated to a much greater degree. We have to get much more proficient in how we discourage people from going.”

There is, the former minister said, “much greater cooperation” in the Muslim community than in previous years—but technological developments present their own unique challenges. The generational divide is exacerbated by “both the means of communication and the kinds of language used,” Neville-Jones told the Today Show, “the kind of messages being put across are much more used by young people than they are by their elders.”

As a result, the “influence between the two [generations] are much reduced.”

Neville-Jones also called for more work to be done on the ground to combat British radicalization, in particular in concert with Turkey—the main transit route for Britons to Syria and Iraq—to “disrupt the flow of people.”

The U.K. Metropolitan Police are working hard to identify Foley’s allegedly British killer, who experts say speaks in a distinctive London accent in the “execution” video. The law enforcement agency has also put out a warning that as the video may constitute “extremist material” under Britain’s strict anti-terror legislation, even watching the footage “may constitute an offence.” However, the Metropolitan Police’s statement has been criticized as “alarmist and false,” and not necessarily supported by law.