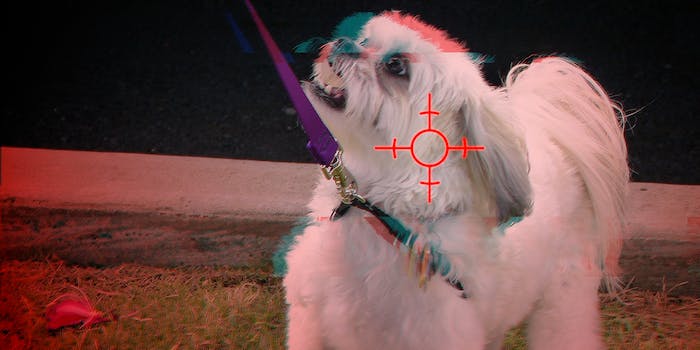 Why was a New York dog walker on an ISIS hit list?

An everyday New Yorker finds out she's on the ISIS hit list.

On Sunday, Julie got the weirdest voicemail.

“Good afternoon, this is Special Agent [name removed] with the FBI,” said the voice. “Please give me a call back regarding information of yours that might have leaked via a social media portal on an ISIS platform.”

The 35-year-old Brooklyn resident, who runs her own dog-walking business, panicked as she heard the FBI agent’s voice on her phone.

“There’s no specific or credible threat at this time,” the agent said, “but please give me a call back so that I can brief you on the appropriate details.”

Julie, who preferred that her last name not be used, shared the voicemail with the Daily Dot. She said that, at first, she thought it might be a prank—or a scam possibly involving a faux Nigerian prince.

It turned out to be very real.

The FBI agent’s call was just one of thousands that will be placed in the coming days, as the law-enforcement agency tries to track down and warn all 3,600 New Yorkers whose names and addresses were discovered on the latest ‘hit list’ shared by the Islamic State-allied hacking group United Cyber Caliphate last week.

“Please give me a call back regarding information of yours that might have leaked via a social media portal on an ISIS platform.”

If the Cyber Caliphate sounds familiar, it’s because the group—or one with the same name—took responsibility for hacking the YouTube and Twitter accounts of U.S. Central Command in January 2015.

The list was shared in a thread on Telegram, an encrypted social media platform popular among ISIS supporters. On Friday, the Daily Dot viewed several active jihadi Telegram channels where users posted graphic videos and ISIS brags. While the German app company behind Telegram has previously tried to wipe the platform free of ISIS channels, it does not appear to have worked.

While real, everyday New Yorkers were disturbed to discover that their names and addresses were targeted, such hit lists have become a frequent occurrence on Telegram. And despite warnings of cyber jihad, it doesn’t take much hacking skill to compile a list of 3,600 random New York City residents.

When the self-described “Islamic State Hacking Division” posted 100 names, photos, and addresses of military personnel in March 2015, many were impressed by what they assumed was a massive Pentagon breach. Until, that is, Daily Beast reporters discovered that most of the names were taken off promotional military materials that anyone with a search engine could view.

The truth is, most people’s names and addresses are easily accessible online. Whether it’s via our multiple social media platforms or through marketing sites like NextMark that warehouse and sell consumer information by the bucketful, even most celebrities can be tracked down by a particularly motivated Googler. But using a pile of identities easily found online to scare U.S. citizens? That’s just classic ISIS propaganda.

The FBI, though diligently notifying the listed New Yorkers one by one, is also telling people not to worry.

“The agent recommended that I be off social media for awhile,” Julie told the Daily Dot. “He said my old information—old address, old email—was posted on an ISIS website saying I’m a government worker, which I am not.”

That’s the part that Julie found most perplexing. Not only was the address posted somewhere she hadn’t lived in over eight years—what on earth did jihadis want with a dog walker?

According to news reports, the United Cyber Caliphate posted the list of names and addresses with the message “We want them #Dead.” Among the other targets that ISIS wants dead—you know, besides dog walkers: a Brooklyn writer named Melissa and an 88-year-old retiree named Art, both interviewed by NBC News on Friday.

“I’m not worried about it,” Julie told the Daily Dot. “I mostly think it’s funny.”

The worst thing about finding out she’s an ISIS target, said Julie, is that it’s just the latest in a bad string of cyber-luck. In April, she also happened to be one of the thousands of Brooklyn residents mysteriously dumped from the voter registration rolls—even though, she says, her information was up to date and she’d had no problem voting before. Now that’s something to get worked up about.