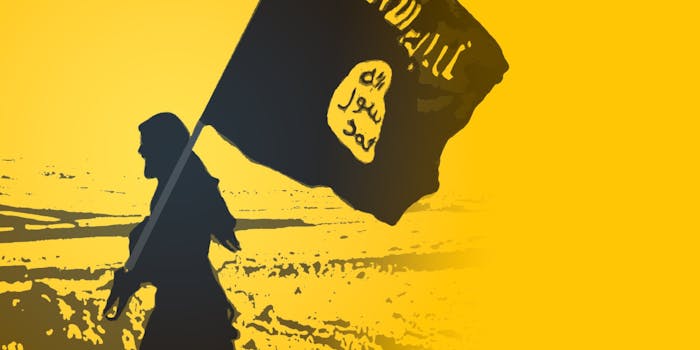 An Ohio man has been indicted for sharing an Islamic State “kill list” made of up names of members of the U.S. military intended to be targeted at home.

Terrence McNeil, 25, faces three counts of solicitation of violence and three counts of threatening military personnel after reblogging an ISIS GIF on Tumblr and posting a common tweet that called for the death of the U.S. Navy Seal who killed Osama Bin Laden.

The Federal Bureau of Investigation says its evidence shows McNeil pledged support to ISIS online. He shared explicit propaganda on Facebook, the FBI says. On Tumblr, authorities allege, he reblogged a single GIF that functioned as a slideshow of various members of the military, including pictures, names, addresses, and the following text:

now we have made it easy for you by giving you addresses, all you need to do is take the final step, so what are you waiting for? Kill them in their own lands, behead them in their own homes, stab them to death as they walk their streets thinking that they are safe

McNeil also allegedly posted, on Twitter, the message, “Released – Address of the US Navy Seal Robert O’Neil who killed Sheikh Osama Bin Laden R.A – #GoForth #RunRobertRun,” along with a picture that purported to be O’Neil’s home address. A search of cached tweets, however, indicates that was a common tweet among ISIS supporters.

The indictment of McNeil is the latest step in the U.S. government’s worldwide effort to track those related to a series of at least three ISIS “doxes” of U.S. service members. The released personal information includes lists of their names and identifying information, along with the request to cause them harm.

In at least one such case, the information came from a surprisingly circuitous route. According to the FBI, the leader of Albania’s self-proclaimed “largest hacking group,” Kosovo Hacker’s Security, hacked a U.S. retailer, found some U.S. military members among the customers, and shared it with the ISIS hacker Tr1ck, who was later reportedly killed by a U.S. drone strike.

Online ISIS supporters are sometimes deadly offline. Tashfeen Malik, one of two San Bernardino shooters who in killed 14 people before being killed by police, had reportedly professed her allegiance to the terrorist group on Facebook. ISIS leadership is not believed to have been involved in the planning of the San Bernardino attack.

The facts are not always so clear. Another major English-language ISIS figure, arrested in Florida in September, reportedly turned out to be a Jewish 20-year-old living with his parents, and who also adopted online personas of white supremacy.

Stephen Anthony, the FBI Special Agent in Charge of McNeil’s investigation, said in a statement that McNeil’s online activity was not protected by the First Amendment.

“While we aggressively defend First Amendment rights,” he said, “the individual arrested went far beyond free speech by reposting names and addresses of 100 U.S. service members, all with the intent to have them killed.”