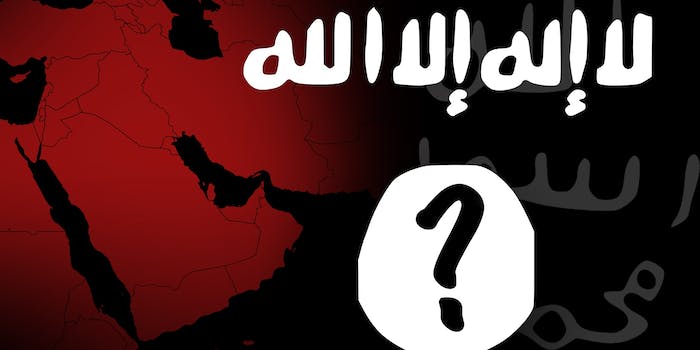 Why do we still call Islamic State ‘ISIS’? Pageviews

What are we to call the Islamist military force sweeping across the Middle East? ISIS? Or Islamic State? QSIS? AQI, even?

Despite decisive victories over the last year establishing the organisation as a force to be reckoned with, there’s no clear consensus on the correct nomenclature. Obsolete or disputed titles proliferate across the Internet—and the apparent reason for this is more cynical than you might expect.

This week an influential Islamic authority called for the media to stop referring to the militant Islamist group as “Islamic,” claiming its philosophy is out of line with true Muslim teachings. Instead, the Egyptian Dar Al-Iftaa—an internationally respected branch of Egypt’s justice ministry—is calling for “both Muslims and non-Muslims” to refer to the organisation as QSIS.

To understand why, first you have to understand what ISIS means—and the myriad names the group is already known by. They first registered on the general public’s radar in 2013 while called Al-Dawla Al-Islamiya al-Iraq wa al-Sham, an Arabic name translating as “the Islamic State of Iraq and al-Sham”—a.k.a. ISIS. Al-Sham here is interpreted either as referring to Syria and Damascus, or to the area of greater Syria that roughly (but not exactly) correspondents to the Levant—which is the reason for its alternative moniker, ISIL.

The organisation is seeking to create a new cross-border Caliphate (or Islamic state) in the region, and has enjoyed numerous military successes in recent months—and has been accused of committing war crimes while in pursuit of its political goals. The Islamist group made international headlines earlier in August with its YouTube execution of American photojournalist James Foley, and the U.S. is currently carrying out airstrikes in Iraq in an attempt to arrest the Al-Qaeda offshoot group’s progress.

People laughed when Bin Laden said from Afghanistan that he wanted to liberate Palestine. Today AQ controls a border crossing with Israel.

The organisation’s most recognisable name might be ISIS—it’s used by most major Western news outlets—but others use the alternative title ISIL (Islamic State of Iraq and the Levant). The American and Australian governments are amongst those that prefer this alternative name.

Others dispute this term, arguing that when “ISIS” was formed, al-Sham was used in its more narrow sense to refer specifically to Syria and and Damascus, and so should not be used interchangeably with the Levant.

Complicating matters, the organisation no longer identifies with either title. From June 2014 onwards, the Islamist organisation has bequeathed itself with the simplified name of Islamic State, or IS for short. Known for its powerful propaganda,  the group’s changed nomenclature is part of the careful curation of its image, Dr Anne Aly told Daily Mail Australia—an attempt to transcend geographic limitations. “ISIS is very smartly branding itself as the Islamic State,” she says. “That’s how it’s been able to attract so many followers.”

Egypt’s Al-Iftaa takes exception to this position however: “IS” began as an al-Qaeda splinter group, and the new name the Egyptian body proposes both reflects this and rejects the group’s attempts to position themselves as a representation of true Islam. QSIS, then, stands for “Al-Qaeda Separatists in Iraq and Syria,” a moniker that strips the militants of their co-option of Islam. According to a statement, the campaign not only seeks “to exonerate the name of Islam from the terrorist group’s heinous acts but also to condemn these dreadful acts under the name of humanity.”

Baghdadi could call it whatever he wants but I refuse to recognize his state #QSnotIS pic.twitter.com/TFDNCqReeO

(Just to complicate things further, the Guardian—slightly-tongue-in-cheek—suggests that even if the “Islamic” title is dropped, some may prefer to refer to the group as QSIL.)

Some even take exception to describing QSIS as a “Jihadist” organisation, on similar grounds to Al-Iftaa’s announcement: Jihad roughly means a “holy struggle,” and the group’s self-declared religiosity should not be given any validation, critics say.

The correct term is “irhabi” (terrorist), not “jihadi”. #IS #ISIS #داعش

Prior to the “irhabi” group’s rise to prominence, it also had various other abbreviated monikers, including AQI, ISI and JTL, but they’re no longer broadly recognised. ISIS, however, remains the clear winner in this name game, despite its obsolescence. So why is it still being used? 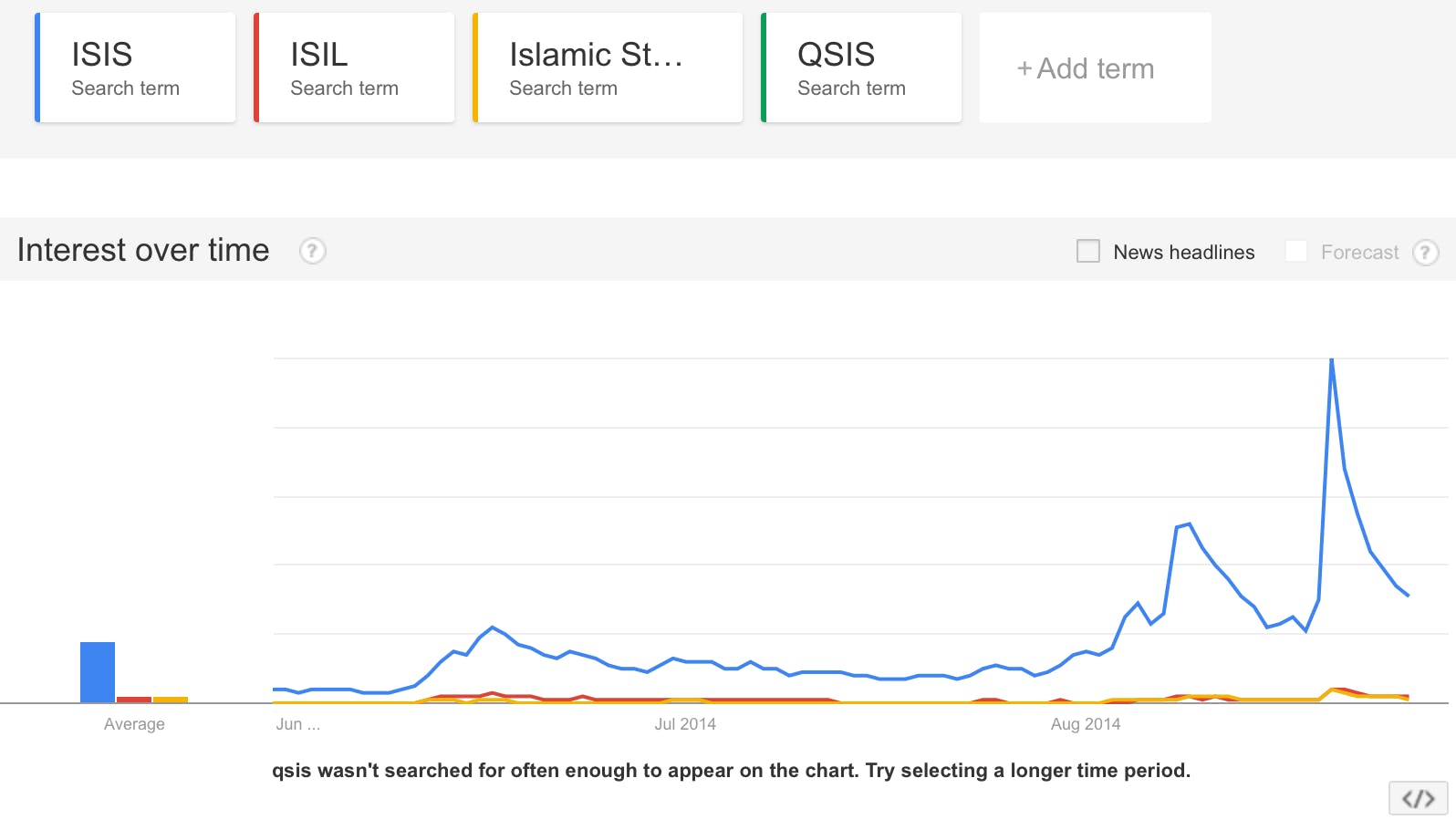 For the hits, quite simply. As seen in the Google Trends graph above, regardless of what the organisation may choose to call itself, people are still overwhelmingly searching for ISIS, and referring to it as such. “ISIS” sees at least ten times more traffic than either ISIL or Islamic State—and QSIS doesn’t even register (though, admittedly, it is only a week old). A concerted effort by the media could potentially re-educate people—but in the short-term, any publication trying to do so would be sabotaging its own traffic and otherwise not reaching most readers who are searching for information on the group. (Which is why the headline of this very article includes the term “ISIS.”)

So are we stuck with allowing the militant horde to have “Islamic” State in its name—even if it means accidentally legitimising its propaganda with their every mention? Not necessarily.

As the Washington Post notes, there’s a precedent for using “delegitimizing” names, notably the describing of the self-declared “Red Army Faction” German terrorist group as the “Baader-Meinhof Gang.” The only question is whether anyone is prepared to put principle over pageviews.