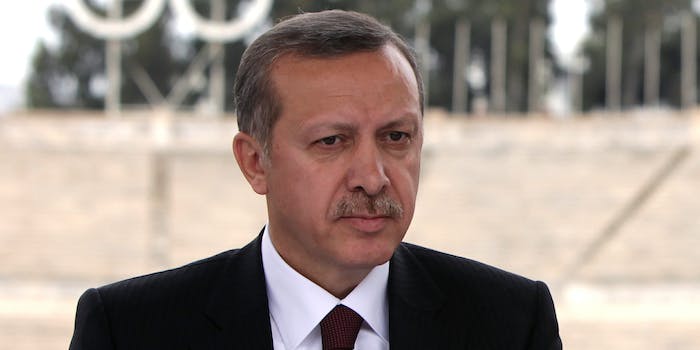 Are iPhones and social media to blame for Turkey’s plunging economy?

They probably aren't to blame.

Turkey’s economy is in dire straits right now, but the country’s long-term President Recep Tayyip Erdogan is busy blaming social media users for the plunge and offering to boycott U.S. consumer goods as a solution.

In the wake of the economic crisis, Erdogan, who uses an iPhone and a MacBook himself, urged Turks to switch phones produced by Turkish Vestel.

Yet, his solution may not be without a lot of flaws. Reporters and social media users were quick to note that from Qualcomm chips and Corning Glass to Android software, Erdogan’s Turkish solution may not work without the U.S. technology giants behind it.

Companies in Turkey, however, were swift to please the president.

Turkish Airlines and the country’s largest network operator Turk Telekom, both of which are partially owned by the state, announced they will cease U.S. advertisement, Reuters reported. Turkish government also raised tariffs on 20 U.S. goods, including automobiles and beauty products.

A Turkish hashtag for #Boykot gained 23K tweets within hours on Twitter with pro-Erdogan Turks posting videos of them breaking iPhones.

Erdogan’s attempt to paint the United States as a villain comes at a time when the anti-American sentiment in Turkey is high, as many Turks view the U.S. military support for the Syrian Kurds as a stab in the back. While the U.S.-led coalition sees Kurdish militia in Syria as a partner in its fights against the radical jihadist Islamic State, Ankara is concerned that the U.S. arms may turn against it as armed Kurds in Turkey has been waging a decades-long separatist fight within the country.

Ankara’s relations with Washington further strained after the Trump administration failed to extradite a Turkish imam in exile, Fethullah Gulen, the leader of a religious movement that Ankara blames for masterminding the July 2016 coup attempt where 180 civilians were killed on the streets.

The Turkish economy went into turbulence during the two-year-long emergency rule under Erdogan where about 10 percent of public employees were purged, and thousands of schools, charities, and media outlets were shut down for alleged affiliation with the coup plotters.

Turkey’s economy is heavily dependent on foreign investment, and raids against companies and seizure of assets for alleged affiliation with the Gulen movement worried investors. Erdogan’s appointment of his son-in-law, Berat Albayrak, as the finance minister last month seems to have drained investor confidence, experts say.

President Donald Trump’s unexpected announcement of sanctions and punitive tariffs on Turkey after Erdogan’s failure to release U.S. citizen pastor Andrew Brunson, who remained in custody for almost two years on terrorism charges, made it worse.

I have just authorized a doubling of Tariffs on Steel and Aluminum with respect to Turkey as their currency, the Turkish Lira, slides rapidly downward against our very strong Dollar! Aluminum will now be 20% and Steel 50%. Our relations with Turkey are not good at this time!

In a speech in Ankara on Monday, Erdogan downplayed the crisis as a currency speculation and vowed to fight against what he called “economic terrorists on social media.”

While 90 percent of the Turkish mainstream media is owned by groups affiliated with Erdogan’s ruling party, his control over social media is weaker. After the 2013 Gezi protests, which was organized online, Erdogan said he considers social media as the “worst menace to the society.”

Turkey’s interior ministry announces investigation opened against 346 social media accounts because of their posts that allegedly provoked the collapse of the #lira. That’s surely a way to reassure the markets

Legal scholar and syber rights activist Yaman Akdeniz said the launching of the investigations aim to intimidate people speaking about the economy on social media.

Erol Onderoglu from the Paris-based rights group Reporters Without Borders said he is concerned that the prosecutors will target journalists and media outlets who dare to criticize the government’s economic policy.

Turkey has a vaguely written anti-terrorism law which was used to prosecute journalists and social media users many times before.

Chief editor of the leftist daily Evrensel, Fatih Polat, said journalists in Turkey were interrogated under anti-terror investigations for their opinions.

“Now the [prosecutor’s] question will be ‘What do you think about the economic attack that targets our country and the economic war we’re in?’” he said.