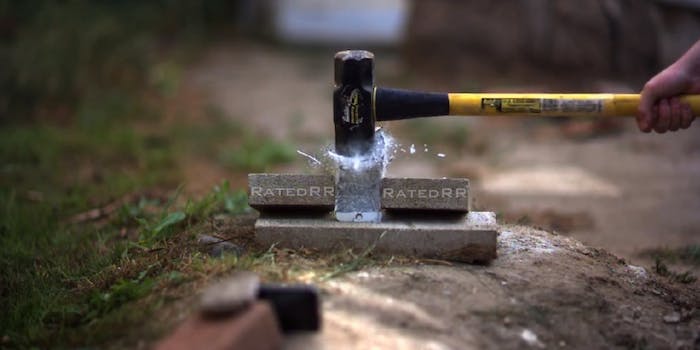 Not even an Otterbox can protect you from what you're about to see.

With the release of any highly anticipated new tech product, you can expect the usual glut of destruction videos to follow. How will the new Android fare against a Soviet missile launcher from the Cold War? What if you were to strap a Samsung smartwatch to a mouse and then toss them both into a box containing a thousand venomous snakes?

But the art of destruction is something that can’t be rushed, it takes time. Yet, the folks over at the uber popular YouTube channel RatedRR have prevailed, releasing a whole slew of iPhone 6 and iPhone 6 Plus annihilation videos only four short days after they hit stores. The effort is part of something they’ve dubbed “six days of torture test,” after the sixth incarnation of Apple’s smartphone. It’s like the 12 days of Christmas, only with more smashing.

The first in the barrage of testing was the iPhone 6 Plus versus liquid nitrogen and a hammer, proving that not even iOS 8 can protect you from subarctic temperatures.

Then came the blender test, which goes to show that if you have a sharp blade and enough horsepower, anything can be turned into a pile of dust.

Of course no iPhone testing can be considered thorough until you drop it a few times. This might seem like the least interesting of the group, until you record it with super sweet slow motion.

Finally, there’s the de rigueur bullet test. If someone has a decent aim, it’s easy to guess how this one turns out.

It looks like Otterbox has their work cutout for them in creating the next indestructable case to protect your precious iPhone.