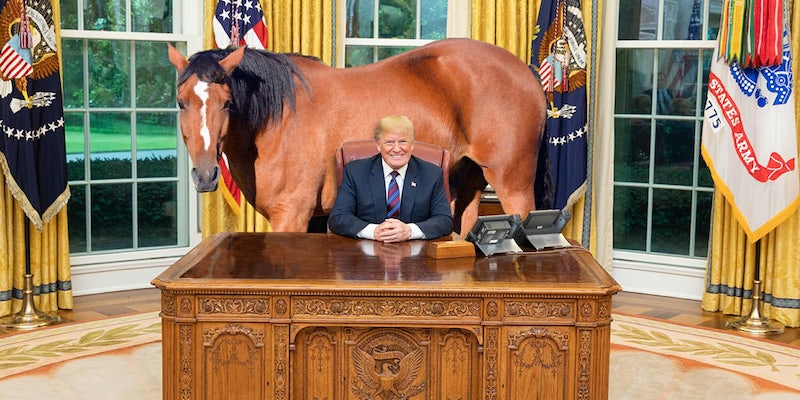 Should Trump invite Justify, the Triple Crown winner, to the White House?

It's not totally out of the question.

On Saturday, racehorse Justify (a horse) won the Belmont Stakes, becoming the second horse since Affirmed in 1978 to win the Triple Crown, horse racing’s most daunting trifecta.

This week, President Donald Trump (a person), suffered a series of unfortunate PR debacles when he withdrew invites to the White House for both the Super Bowl-winning Philadelphia Eagles and the Golden State Warriors after players on the teams announced their intention to boycott the traditional honor.

What does one win have to with the other set of wins (and losses on Trump’s part)?

It was even proposed by longtime Trump supporter Sheriff David Clarke.

.@realDonaldTrump should invite JUSTIFY to the White House lawn for winning the Triple Crown.
Justify is a WINNER like Trump who could care less about leftist identity politics.#MAGA pic.twitter.com/dXA365qx6X

It’s unclear whether Clarke is being sincere here, but people wanted to remind the man with the cowboy hat in his avatar of something that may have escaped him.

justify is a horse https://t.co/mH9GR8xMYP

Here’s a funny rebuttal to the notion, too.

Breaking: #Justify turns down invitation to White House. Asked why, the #TripleCrown winner said “If I wanted to see a horse’s ass, I would’ve finished second.”

But all jokes aside, this should happen, if only to get answers to the 1,000 questions it presents.

There is news that Justify is partly owned by conservative boogeyman George Soros, so it’s possible that he does identify more with leftist politics than Clarke thinks. A socialist horse! But so what? This could be just another way for Trump to stick it to the liberals, by trotting out (and maybe mounting?) one of most famous possessions of the biggest proponent of liberal causes.

Whether the decision to attend would be Justify’s alone to make is unclear: NBA and NFL owners in the years since Trump took office have let the decision fall to players. Would Justify’s owners afford it the same respect, despite its lack of agency (as a horse)?

And if Justify refused to give a definitive answer when pressed, would Trump get in a Twitter fight with something without opposable thumbs? Would he still manage to lose that fight? It’s possible!

I don’t personally know how he feels about horses, but he has, on Twitter, declared himself more important than horses, so there’s that, too.

"@ScottFConroy: Kentucky Derby? More like Kentucky Losers! DonaldTrump is only horse in race that matters for America! Strong, fierce, noble

Invite the horse and let’s find out! No matter what, it could only be the 12th dumbest news cycle of the week.