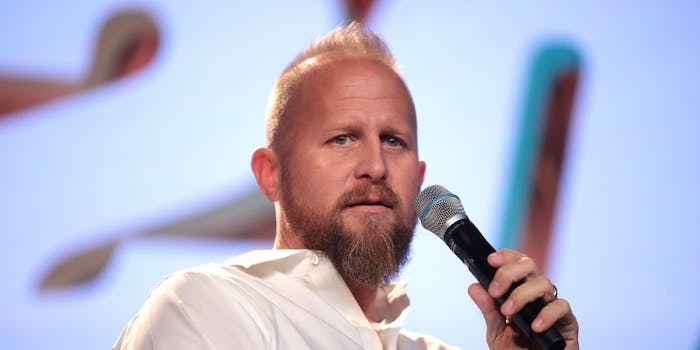 It's a reach at best.

The Trump campaign instantly blamed Democrats and “Republicans in name only,” commonly referred to as RINOs. People online are largely dismissing this argument as ludicrous.

According to the Sun-Sentinel, yesterday afternoon Candice Parscale called police in Fort Lauderdale, where the couple resides. She said that her husband armed himself with a loaded pistol during a heated argument between the two. She then fled to a neighbor’s house and called 911. She told dispatchers she feared he would kill himself.

A standoff between Brad Parscale and police ensued, only ending when a friend on the force convinced him to surrender.

The Sun-Sentinel reports that police said Brad appeared intoxicated and Candice had bruises on her arms and face when they arrived. Candice allegedly told authorities that her husband hits her and said he caused these injuries earlier in the week.

Candice allegedly told authorities that her husband drinks and “suffers from PTSD,” or post traumatic stress disorder. She also said that he’d been under increasing stress in the last two weeks and had made statements about shooting himself.

Many are speculating that Parscale’s alleged suicidal behavior was at least partially caused by two recent stressors in his professional life.

Days after the disastrous Trump rally in Tulsa, Oklahoma this June, Brad was demoted from the role of campaign manager. He has since served as digital director.

The campaign has also recently weathered accusations that it laundered $170 million. Brad is directly implicated in the complaint by the Campaign Legal Center, a nonpartisan watchdog group, filed with the Federal Election Commission in late July.

Both Parscale and the campaign have alternately denied or minimized these accusations.

It seems only natural to assume that these events have placed Brad Parscale under significant stress. Not according to Team Trump, however.

The campaign has blamed Democrats and RINOs for its former manager’s mental health crisis.

“The disgusting, personal attacks from Democrats and disgruntled RINOs have gone too far, and they should be ashamed of themselves for what they’ve done to this man and his family,” Trump communications director Tim Murtaugh told the Daily Beast in a statement.

People online were largely unmoved by the campaign’s attempt to spin the narrative. Many thought that it was more likely that professional stress was a far more likely cause. Some even blamed Trump himself.

“You would think it was the Dems that fired him,” tweeted one. (Brad was officially demoted, not fired, though his visibility has diminished substantially since he was moved to the role of digital director.)

Columnist Mark Harris opined that the campaign’s initial reaction was to figure out how they could use the news to their advantage. “TrumpWorld at its purest,” he tweeted.

While most expressed sympathy for both Parscales yesterday, today’s allegations that Brad abuses his wife undermined some sympathy for him.

Others pointed out that mental health crises are often caused by a variety of factors and/or underlying conditions and that there’s no evidence that political adversaries’ “attacks” had anything to do with it.

It also struck some as hypocritical that the Trump campaign would blame partisan attacks, given the president’s undeniable penchant for making personal attacks on his real and perceived adversaries.

Brad Parscale is reportedly receiving treatment at a mental health facility. The Miami-Herald reports that he has not been charged with any crimes.

If you are experiencing a mental health crisis, call the National Suicide Prevention Lifeline at 1-800-273-TALK (8255).