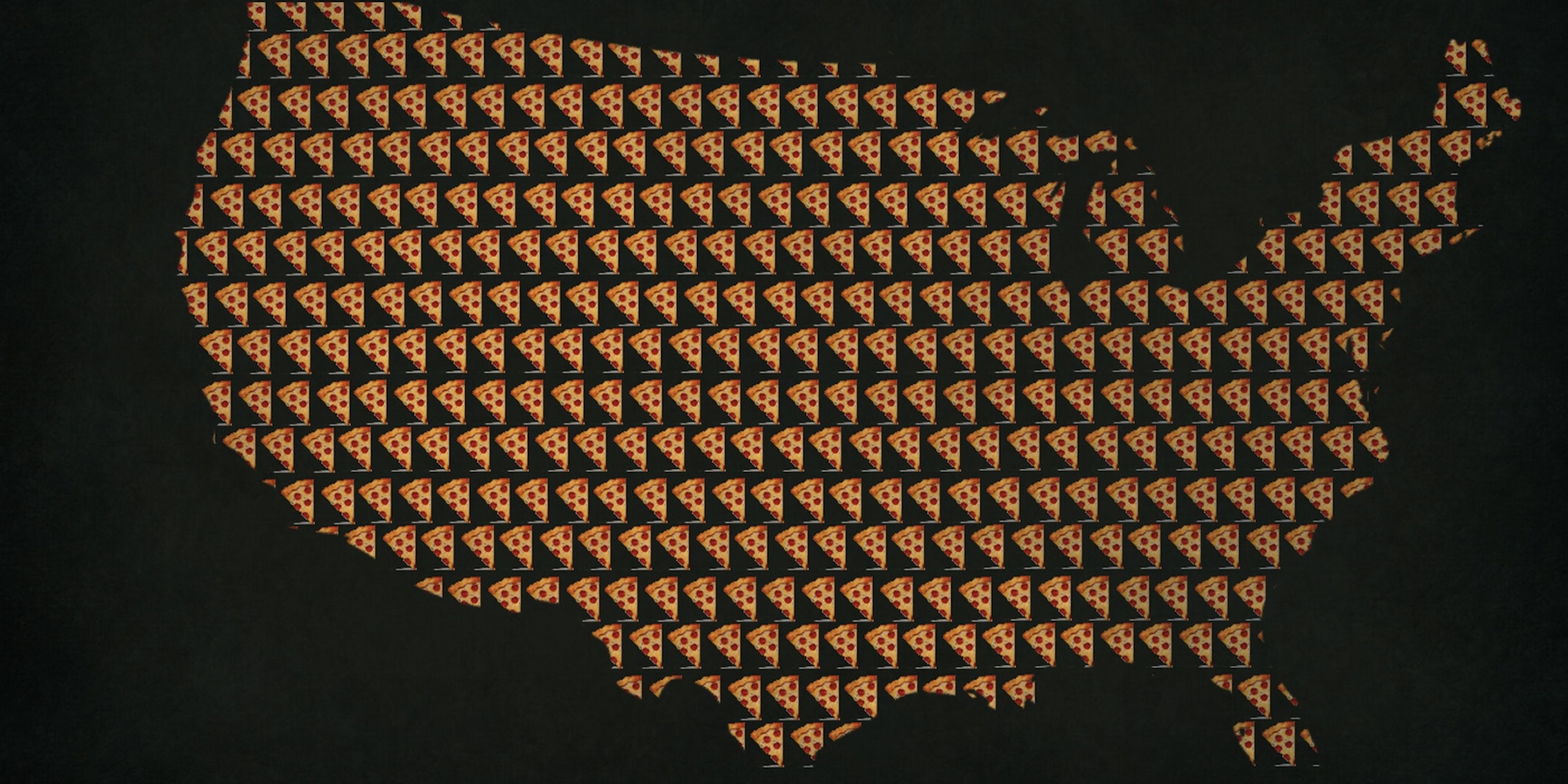 Russia has some surprising emoji use.

What might be lost in translation in standard text form comes through loud and clear in the language of emoji. The little unicode characters transcend barriers because no matter what language you speak, you immediately recognize what a poop symbol means. Thanks to a new study from SwiftKey, we now have a better idea of how people around the world use emoji to communicate.

SwiftKey, the popular alternative keyboard app for Android and iOS, tapped into its user base of more than 250 million people and drew data over a four-month period between October 2014 and January 2015. The data yielded over one billion emoji used by speakers of 16 different languages.

The results found a few surprises.

Canadians, often thought to be the mild-mannered and inoffensive neighbors to the north of raucous and vulgar Americans, scored as the most frequent users of raunchier emoji like the poop and gun characters. Maybe they just get all their indecent urges out in text bubbles before carrying on as civilized folk.

Americans, perhaps not surprisingly, led the way in the use of food emoji. Meat and pizza were among our favorites, though Americans also led the world in the use of eggplants so perhaps we’re getting healthier. Folks in the United States also love money bags, keeping it 100, basketball and baseball, skulls, and emoji that SwiftKey qualifies as “female-oriented” like lipstick and bows. Americans also led the way in LGBT emoji (qualified as two men or two women holding hands and the rainbow icon) by a wide margin. 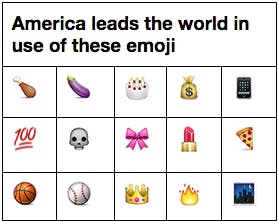 According to the study, Australians emoji use makes them seem like a people enjoying a permanent spring break. English-speaking Aussies used the most holiday, junk food, drugs, and alcohol-related symbols. They also led in the categories of pets, mammals, and clothes.

Brazilians were the most religious users, using the most chruch, night sky, and hands praying emoji—unless you belief the hands praying are hands high-fiving, in which case Brazil is the most celebratory language. Russia, on the other hand, was the most romantic, with an affinity for kissing emoji.

Malaysia revealed its sense of humor with its emoji usage, rating as the country that uses the most poop and fart emoji by nearly double the average rate. Malaysians also used the most sleep emoji, likely because they’re exhausted from sending all those fart jokes.

SwiftKey’s study revealed that Europeans are much more likely to use the winky face emoji than Americans, while stateside users will chuck up the peace sign more than those across the pond. Europeans also love the wine emoji, to absolutely no one’s surprise. 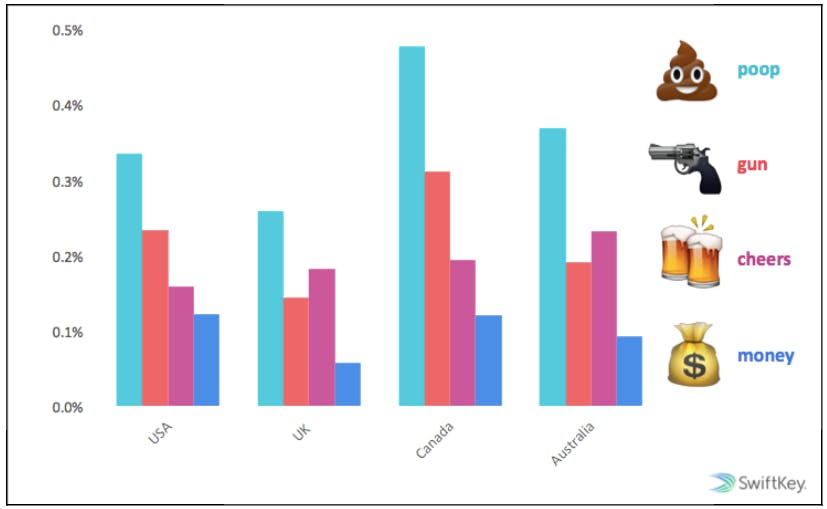 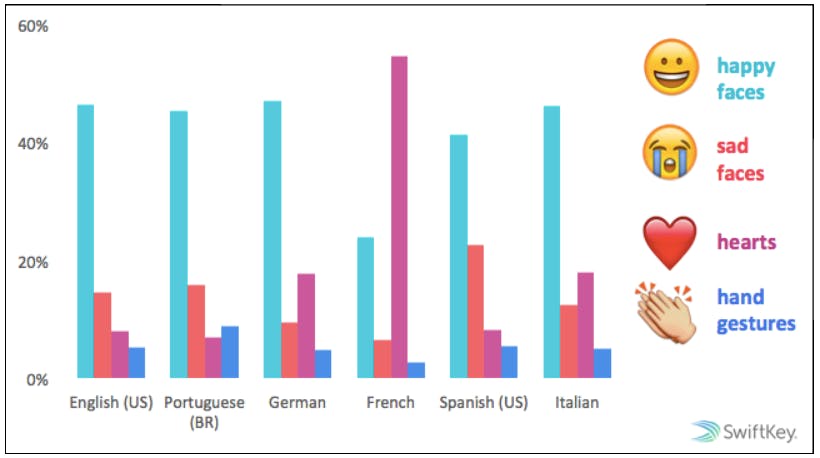 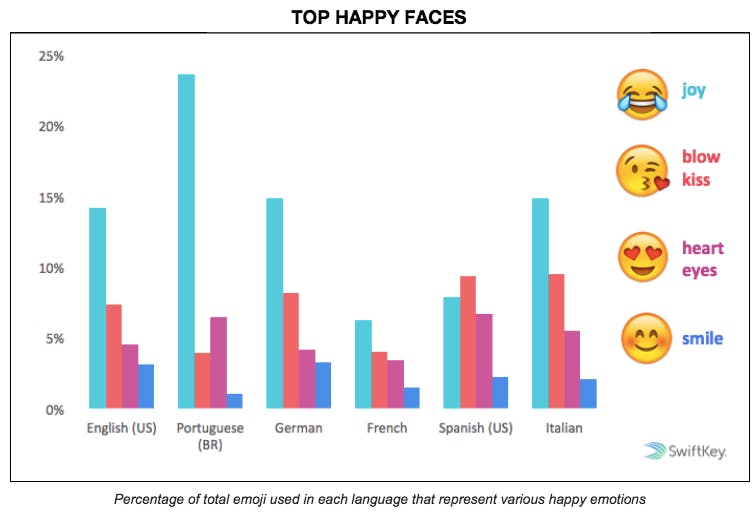 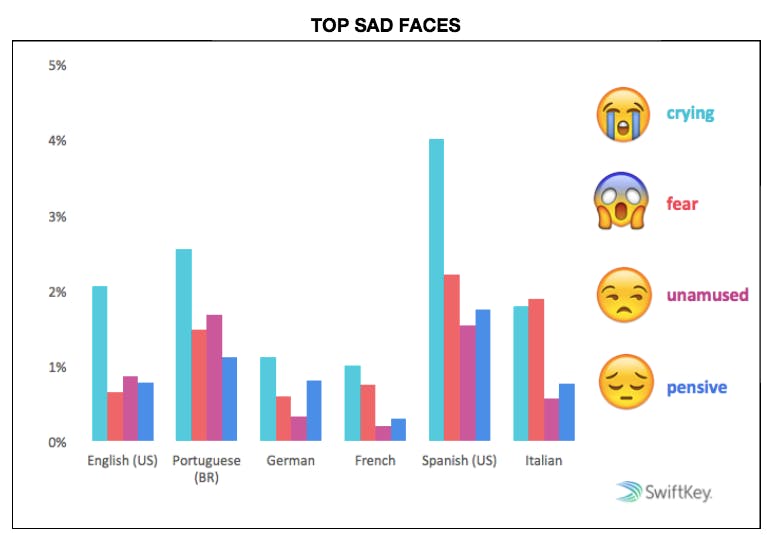 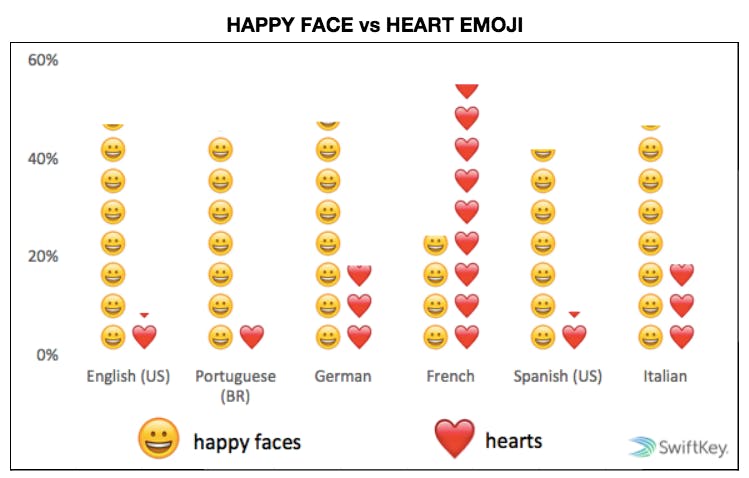 In general, emoji are a sign of good vibes when included in messages. SwiftKey reports that 70 percent of all emoji used carried a positive sentiment, with only 15 percent being used negatively. The French clocked in at the most positive with 86 percent used with that connotation, while Spanish speakers in the United States had the most negative uses at 22 percent.