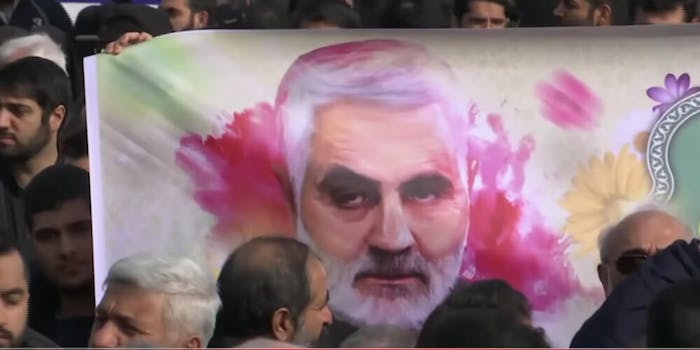 An Iranian government spokesman said the move is 'undemocratic.'

According to Mashable, Instagram is one of the few Western social media sites not blocked in Iran. Because of this, many Iranians posted about Soleimani after his death.

At least 15 Iranian journalists have had their accounts suspended, Coda Story reports.

Facebook, which owns Instagram, said it’s complying with the sanctions against Iran by removing the posts and accounts.

“We operate under U.S. sanctions laws, including those related to the U.S. government’s designation of the IRGC and its leadership,” a Facebook spokesperson told CNN.

The spokesperson said it removes posts that praise the actions of sanctioned individuals and parties and seek to help further their actions. Users can go through Facebook’s appeals process if they feel their content was deleted in error.

In a tweet, Iranian government spokesman Ali Rabiei said the move is “undemocratic.”

“Instagram has blocked an innocence nations’ voice protesting to the assesination ofGeneral #Soleimani, while the real terrorists have been given an open voice,” Rabiei wrote. “The stick behind the democracy and media freedom is displayed in the nick of time.”

In an undemocratic and unashmed action,Instagram has blocked an innocence nations' voice protesting to the assesination ofGeneral #Soleimani,while the real terrorists have been given an open voice.The stick behind the democracy and media freedom is displayed in the nick of time

As Mashable reports, the Iranian government has now called for nationwide legal action against Instagram. It’s also created a portal for Iranians to submit posts that have been deleted.