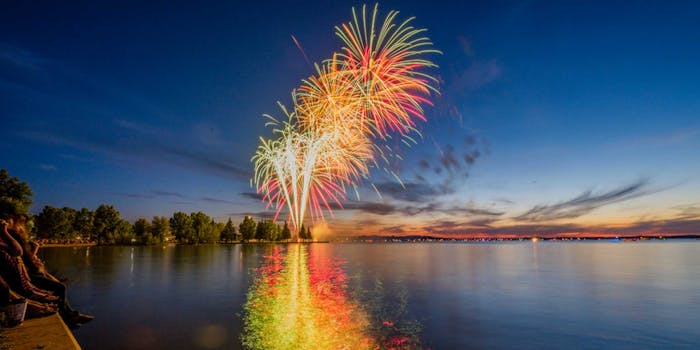 Exercise your right as an American to take and Instagram way too many photos of fireworks tonight.

It’s the Fourth of July! Independence Day! The day when, in 1776, an ardent group of men declared the United States an independent country. They paved the way to the America we live in today, one with red, white, blue, barbeque, and legions of phone addicts eager to show off how they’re celebrating the accomplishments of our forefathers. And we’re going to do it by taking a ton of pictures of Fireworks and putting them on Instagram.

With Instagram’s latest update, it’s now easier than ever to tweak your photos to make them as beautiful as possible. So if you want to do as smartphone users do and exercise your right as an American to overshare today’s festivities, then at least make sure those photos look good.

Do the tiniest bit of prep work. Before you get to Instagram, keep it simple. Scope out where the fireworks will be and frame the shot beforehand so all you’ll have to do is snap the pic when the show starts.

Don’t use flash—the colorful lights from the fireworks will be enough to illuminate your screen.


Same goes for zoom: Don’t use it. Using zoom depletes the quality of the photo. You’ll be better off cropping the picture later.

Don’t fall for the lux feature. Lux is cool for adding a quick splash of saturation and contrast to your photo, but too much of it can leave your shot looking grainy. Bright lights against a black sky are already prone to graininess. You’re better off tweaking settings manually.


Higher contrast, lower brightness. For a dynamic photo, forego some brightness. A dazzling display won’t lose all of its luster, but it will make the night sky around it darker. But to compensate, increasing the contrast will do the trick. The highlight and shadow functions can help with this as well. A higher setting on highlight could play up the brightness of the fireworks, while a lower setting on shadows can eliminate any incoming sources of light if you happen to be near a streetlamp or tall building.


Don’t go color crazy. The warmth setting could allow the colors in the photo to pop, but too much could make everything look too yellow or too blue. The same goes for saturation.


Use your phone’s focus. Once the firework has gone off, tap your screen to try and focus on the flames and sparks and follow them by physically moving your phone. It might take a little practice, but you’ll get clearer pictures. (If you want to cheat a little, you can use apps that let you manipulate shutter seed like Slow Shutter or SlowCam.)


This might be the one time you should use Kelvin. Face it: Kelvin is that one Instagram filter that’s there but nobody uses. But unlike other filters such as Nashville, Toaster, or Walden, it won’t add a weird hue on top of the edits you’ve already made. More importantly, Instagram allows users to adjust how much of the filter they want to show up onto the photo, which means you’re not stuck with something you don’t like. Other good filters for night time shots include Mayfair, Hudson, and X-Pro II. Alternatively, if you feel like you got the perfect shot, consider using #nofilter, and let the beauty of controlled explosives speak for itself.

The trick to everything is to adjust just enough to replicate the way you saw the firework with your own eyes, not to make it look artificial. Let your fireworks photos fly free.

Photo via Alanpaone/Flickr (CC BY 2.0)