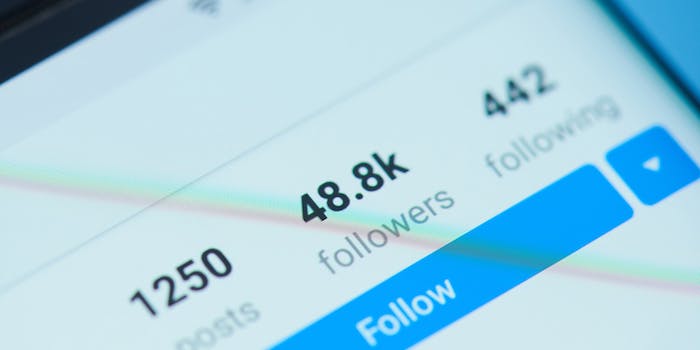 Bragging about your follower count? It might not matter.

A recent study from social media analytics agency Klear found that the follower count is not an effective way for marketers to scout and select Instagram influencers.

Klear examined the difference between a possible influencer’s follower count and their engagement and defined engagement as back and forth communication between accounts and their followers. Klear randomly selected 940,000 Instagram posts published between 2015 and 2016 from a pool of 115,000 users. In order to eliminate bots, Klear analyzed patterns such as “receiving many Likes from newly created accounts,” as opposed to longer-held accounts which gave fewer Likes.

Ultimately, Klear concluded that Instagram follower counts are a “poor metric” for determining the effective influence of accounts on their audience, and engagement is a far more accurate indicator of an account’s viability as a marketing tool.

“We actually noticed that influencers with a small follower count were on occasion driving more impact than influencers with a huge fanbase,” Young wrote. “Fake followers and engagement is a problem in the influencer space, and we wanted to highlight that though an influencer may have a high following count, it doesn’t always mean they are real or relevant to the brand’s goals”

The idea that follower counts aren’t as indicative of market influence as advertisers would hope isn’t necessarily a new one. “Instead of talking about how many people see your content, we need to be focusing on how much value that piece of content actually brings your audience,” social media analyst and VaynerMedia CEO Gary Vaynerchuk wrote way back in 2016. “For a consumer to get excited about something, to be compelled to click an ad or watch a video, it comes down to caring about your audience’s attention.” Some (including Kanye West) argue that social networks should kill off follower counts entirely. (There’s even a Change.org petition for Instagram to get rid of the metric.) Clearly there is interest in ending follower counts, and there is at least some evidence the number might not matter at all.

What arguably makes them matter less are bots. In July 2018, The Information reported that Instagram may have as many 95 million bot accounts dedicated to inflating the follower counts of Instagrammers looking to attract marketers. Differentiating these accounts from real ones can be difficult; they can be private, have convincing bios, or interact with other accounts to the extent that they are indistinguishable.

While follower count is what many believe to be less and less important, it’s another metric that Instagram is toying with eliminated: Likes. Instagram influencers told Business Insider that removing Likes from the platform would force them to “fight for attention” from marketing agencies and audiences alike. While removing Likes made the platform feel less “pressurized” for casual users, it would remove one of the only public metrics used for measuring engagement. For Canadian influencer Kate Weiland, who was subjected to the testing of hiding Likes, they serve as a motivator.

“Now there’s no audience applause at the end of a performance,” Weiland told Business Insider. “It’s kind of like crickets in the background.” If Likes count as a form of engagement, as passive as they may be, then perhaps it’s more worthwhile for the platform to get rid of follower counts instead.

Then again, a report from #paid, a startup investment company, found that 50% of Canadian Instagram users surveyed saw the growth of their follower counts decline after Likes were hidden. This is contrary to the findings of Klear’s study, which said that Likes and other forms of engagement did not have a strong relationship with follower count.

The findings of Klear’s study are not so different from advice marketing agencies are receiving today. Online trade publications Marketing Tech News, Social Media Today, and Forbes all advise focusing on engagement over follower count. And if getting rid of follower counts turns out to be related to Likes…then maybe that form of activity isn’t as indicative of influence, either.