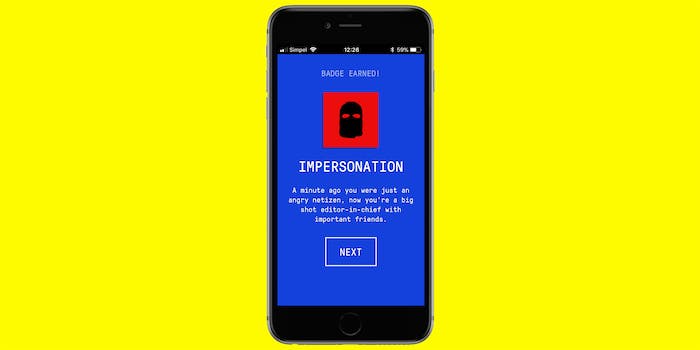 Become the king of fake news—and get better at spotting it in real life.

A game created by University of Cambridge researchers titled Bad News is teaching social media users how to spot fake news when they see it, by putting the player in the role of a maniacal fake news villain.

Players of the game compete to become “a disinformation and fake news tycoon,” according to the Guardian. The goal of the game is to “vaccinate” the public by making them immune to the spread of shady content. Researchers developed the game over six months with a Dutch media collective called Drog.

While playing, you can either impersonate someone important on Twitter or create your own fake news site and become the editor-in-chief. The longer you spread fake and polarizing news, the more your follower count goes up.

“The idea is that once you’ve seen the tactics, and used them in the game, you build up resistance,” said Sander van der Linden, director of the Cambridge Social Decision-Making Lab, in the Guardian. “We want the public to learn what these people are doing by walking in their shoes.”

A player can spread fake stories with conspiracy theories on climate change, GMOs, and war with North Korea. You can personally attack scientists or organizations such as the United Nations using memes as your weapons. According to the game, a good conspiracy starts with something realistic and builds upon it. The site also teaches you to sprinkle legitimate stories in with your posts to trick users into believing your credibility.

At one point, players have the option to rack up more followers by creating thousands of fake bots on Twitter to share their news. “(The bots) can make any small story look huge,” according to the game.

Dozens of famous Twitter users lost more than a million followers in January after federal and state inquiries were imposed on Twitter to investigate firms that sell bot followers, according to the New York Times.

As for getting more human followers riled up to share posts, players in the game can decide which human emotions they want to exploit, including fear and anger.

But be aware, the game is exploiting your emotions too. Bad News feeds on your social media anxiety, telling you 30 followers is “nothing” and “no one cares” about the opinions or story of a person with a such small follower count.

This is a very real fear for social media users today, as “a growing body of research indicates how deeply our brains are wired to seek social approval,” according to the New York Times.

The game even encourages players to behave badly when they click on an ethical option. When a player makes an attempt to spread real news, the site applauds their choice but says, “Good choice! You don’t always have to make everything up yourself. It’s often better to blow an existing story way out of proportion.”

The player completes the game by earning the six badges of fake news, which include “Impersonation,” “Emotion,” and Polarization.” The game awards you but also asks if you feel shame as you play.

Van der Linden said the risk of players getting a thrill from the game and deciding to become fake news conspiracists is outweighed by the number of people who can be educated by Bad News.

So if you get a thrill playing Bad News, use your social media prowess for good.