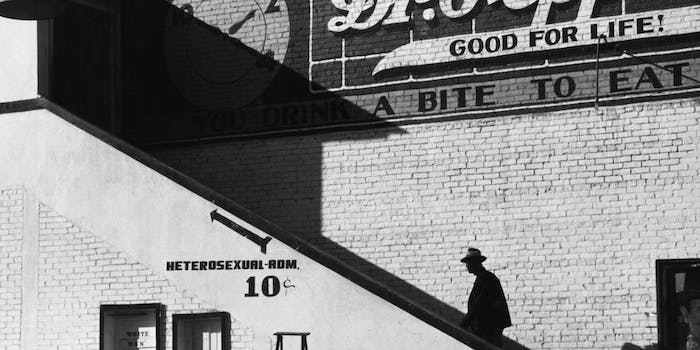 Indiana is facing unremitting criticism over Gov. Mike Pence’s decision to pass a law that could allow businesses to turn away gay and lesbian patrons in the name of “religious freedom.”

Despite the mounting censure from business, academic, and civil rights leaders within the state, Pence says the law, known as the Religious Freedom Restoration Act (RFRA), will remain on the books. While he’s opposed to amending the law in a way that would protect against discrimination based on sexual orientation, Pence said during an interview Sunday on ABC’s This Week, that he would be open to a bill that “reiterates and amplifies and clarifies” the purpose of the law.

“The issue here is, you know, is tolerance a two-way street or not?”

At least four times during the interview, ABC’s George Stephanopoulos pushed Pence to respond either “yes or no” to the question of whether it was now legal for Indiana businesses to refuse service to gays and lesbians. Each time, Pence refused to answer the question, opting instead to criticize the conversation over LGBTQ rights.

“The issue here is, you know, is tolerance a two-way street or not?” Pence said. “There’s a lot of talk about tolerance in this country today having to do with people on the left. But here Indiana—steps forward to protect the constitutional rights and privileges of freedom of religion, for people of faith and families of faith in our state, and this avalanche of intolerance has been poured on our state. It’s just outrageous.”

Pence further defended his decision to sign the RFRA by noting that a federal version of the law was enacted in 1993 and that dozens of states have passed their own versions in the past two decades. On multiple occasions, Pence pointed out that President Barack Obama, while serving as a U.S. Senator from Illinois, supported a religious freedom bill.

The Indiana law differs, however, from the federal statute and similar laws passed in other states in one key area.

On the federal level, and in every state besides Indiana, the religious freedom laws apply to cases specifically involving a person or entity and state, local, or federal governments. The law Pence signed can be applied to disputes between private citizens, “regardless of whether the state or any other governmental entity is a party to the proceeding,” according to Section 9 of the law, the crucial provision that could allow business owners to cite religious freedom as a legal defense in potential discrimination lawsuits.

The differences between Indiana’s law and its federal counterpart were exhaustively detailed in a February letter cosigned by 30 legal scholars with expertise in matters of religious freedom and civil rights.

“In our expert opinion, the clear evidence suggests … and unmistakably demonstrates that the broad language of the proposed state RFRA will more likely create confusion, conflict, and a wave of litigation that will threaten the clarity of religious liberty rights in Indiana while undermining the state’s ability to enforce other compelling interests. This confusion and conflict will increasingly take the form of private actors, such as employers, landlords, small business owners, or corporations, taking the law into their own hands and acting in ways that violate generally applicable laws on the grounds that they have a religious justification for doing so.”

Further, the Illinois version of the RFRA, which Pence repeatedly cites because of Obama’s support, includes a provision that protects its citizens from discrimination based on sexual orientation. Indiana’s law offers no such protection.

Pence’s public defense of the Indiana RFRA has done little to dissuade institutions in the state from denouncing it. On Sunday, Indiana University issued a statement condemning the “unnecessary legislation” on the basis that it had damaged Indiana’s reputation by creating an “unwelcoming and discriminatory atmosphere.” The statement stopped short of speculating about whether the law might actually be used as a legitimate legal defense in a discrimination suit.

The economic fallout for Indiana may prove significant as a number of big businesses have alluded to halting development plans in the state.

“These bills rationalize injustice by pretending to defend something many of us hold dear,” Cook wrote. “They go against the very principles our nation was founded on, and they have the potential to undo decades of progress toward greater equality.”

Apple is open for everyone. We are deeply disappointed in Indiana's new law and calling on Arkansas Gov. to veto the similar #HB1228.

Marc Benioff, CEO of Salesforce, a multi-billion dollar tech giant that purchased the Indianapolis-based Exact Target in 2013 for $2.5 billion, tweeted on Thursday that his company had “cancelled all programs” that require customers and employees “to travel to Indiana to face discrimination.”

We are forced to dramatically reduce our investment in IN based on our employee's & customer's outrage over the Religious Freedom Bill.

Likewise, local business review and search site Angie’s List, which has been headquartered in Indianapolis since its founding in 1995, announced that it was halting a $40 million renovation plan expected to create roughly 1,000 jobs in the state.

“Angie’s List is open to all and discriminates against none, and we are hugely disappointed in what this bill represents,” CEO Bill Oesterle said in a statement Saturday, adding that the company was “reviewing alternatives for the expansion of its headquarters immediately.”

Angie's List will withdraw campus expansion proposal due to passage of #RFRA https://t.co/N4s7mFhhl6

Jeremy Stoppelman, cofounder and CEO of Yelp, published a sternly worded letter following the law’s passage, which said it was “unconscionable to imagine that Yelp would create, maintain, or expand a significant business presence in any state that encouraged discrimination by businesses against our employees, or consumers at large.”

Stoppelman issued a direct warning to other states considering similar legislation, singling out Arkansas in particular. “These laws set a terrible precedent that will likely harm the broader economic health of the states where they have been adopted, the businesses currently operating in those states and, most importantly, the consumers who could be victimized under these laws,” he said.

In total, 16 states have introduced new legislation aimed at protecting “religious freedom,” which conservative groups openly report is an effort to prohibit the government from compelling businesses, such as catering and photography companies, to service same-sex marriages. The U.S. Supreme Court is expected to weigh in on the constitutionality of same-sex marriage bans next month.

Numerous civil liberties groups and individual activists have taken action against the RFRA and the politicians who support it. A petition, which criticized the law for being “broadly-written” and enabling people “to claim that their religious beliefs give them the right to ignore any law,” was circulated online by the American Civil Liberties Union (ACLU), and acquired over 10,000 signatures before the bill became law.

Jane Henegar, executive director of the ACLU of Indiana, said the timing of the legislation is important to understanding its intent. “The bill was introduced as a backlash reaction to achieving marriage equality for same-sex couples in Indiana,” Henegar said in a March 26 statement. Same-sex marriage has been legal in Indiana since October. For over a decade, Republicans have failed to pass an amendment to the state’s constitution defining marriage as the union between a man and a woman.

Konrad Juengling, a prominent LGBT activists from Portland, purchased a group of Internet domains last week made up from the names of Indiana politicians who support the RFRA. The domains include DaleDevon.com, DonLehe.com, DouglasGutwein.com, DonnaSchaibley.com and MartinCarbaugh.com. The URLs now redirect visitors to statistics about LGBT youth on the Human Rights Campaign’s website.

“I think the bill that was passed is reprehensible; it takes a state back decades,” Juengling told the Daily Dot in an email. “It’s segregation under a different name, because it gives anyone the ability to discriminate at will against whomever they choose, citing ‘religious protection.’ What the adherents of the bill aren’t willing to accept, however, is that religious freedom does not (or should not) mean being able to discriminate against an entire class of people. Or anyone for that matter.”

Juengling added that he’s a proponent of ethical consumerism, and hopes major corporations start looking elsewhere to invest their time and money. “Personally, I would not be comfortable going to a state where I know someone can deny me service just because I’m gay. LGBTQ people deserve the same rights and freedoms as their heterosexual counterparts, and knowing that someone could deny service to a whole swathe of people should leave everyone uncomfortable.

Update 11:54am CT, March 30: Leading Indiana lawmakers say they plan to “fix” the state’s RFRA before it goes into effect on July 1, CNN reports. They also assert that the intent of the law was not to exclude anyone in the state.

State House Speaker Brian Bosma (R) said that the intention of the bill has been misrepresented. “What we had hoped for with the bill was a message of inclusion—inclusion of all religious beliefs,” Bosma told CNN. “What instead has come out is a message of exclusion and that was not the intent and hopefully not the effect. But to the extent that it is we are intent on righting that.”