What does an impeachment manager do exactly?

These people will be the Democratic face of impeachment.

Pelosi’s impeachment managers stood beside her on Wednesday in a press conference and were approved by the House last night.

The seven representatives make the final arguments in convincing the Senate and the American people for the conviction and removal of Trump. While the two articles of impeachment passed in the House in December, Democrats still need a two-thirds majority vote in the Senate to take Trump out of office.

“Today, I have the privilege of naming the Managers of the impeachment trial of the President. #DefendOurDemocracy” Pelosi tweeted. 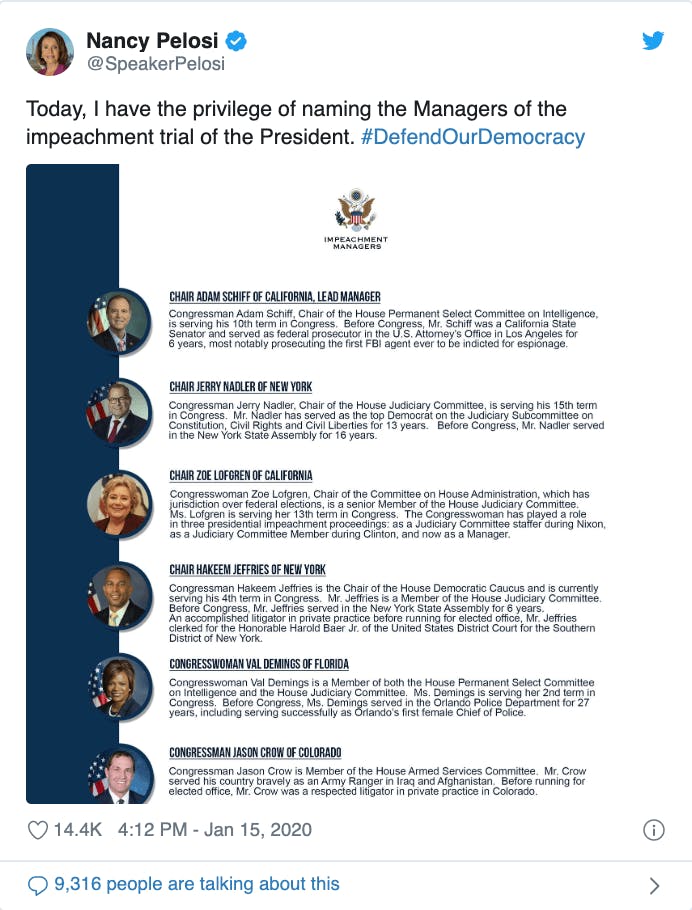 The House impeached Trump for enlisting the help of a foreign country to investigate his political enemies. He faces two charges for abuse of power and obstruction of Congress. Regardless of the outcome in the Senate, Trump is one of just three presidents to have been impeached.

Here is everything you need to know about Pelosi’s picks for impeachment manager.

What is an impeachment manager?

Impeachment managers act as prosecutors in a criminal trial. Likely, they are from the opposing party of the president. Since no House Republicans voted for impeachment, all of the managers come from the left.

The selected members of the House present their argument in front of a jury of Senate members and John Roberts, the chief justice of the Supreme Court. Also in the Senate courtroom will be Trump’s lawyers, who will act as the defense.

It is not a speedy trial. Each manager is given 24 hours, followed by another 16 hours of questioning from the Senate jury.

In the past, the impeachment managers primarily came from the House Judiciary Committee, which tries impeachment in the lower body. But, due to the election year, Pelosi threw in some curveballs, according to USA Today.

“I think the managers will represent people who could potentially hold appeal in both purple House districts and to the handful of undecided voters in swing states,” Democratic strategist Michael Gordon told USA Today.

“You know beforehand that a fair number, if not all of them have either come to a conclusion before the thing even starts or certainly are biased in one direction or another,” Chabot told USA Today.

This does not put the odds in the impeachment managers’ favor, especially considering the majority of the Senate is Republican.

Who are the impeachment managers for Trump’s trial?

Schiff is serving as lead manager, according to Politico, which is fitting considering he oversaw the initial impeachment inquiry.

“Impeachment isn’t about politics or poll numbers. It’s about our duty to our country. President Trump abused the powers of his office to pressure Ukraine to help him cheat in the next election,” Schiff tweeted. “The House upheld our Constitutional duty. It’s up to the Senate to do the same.” 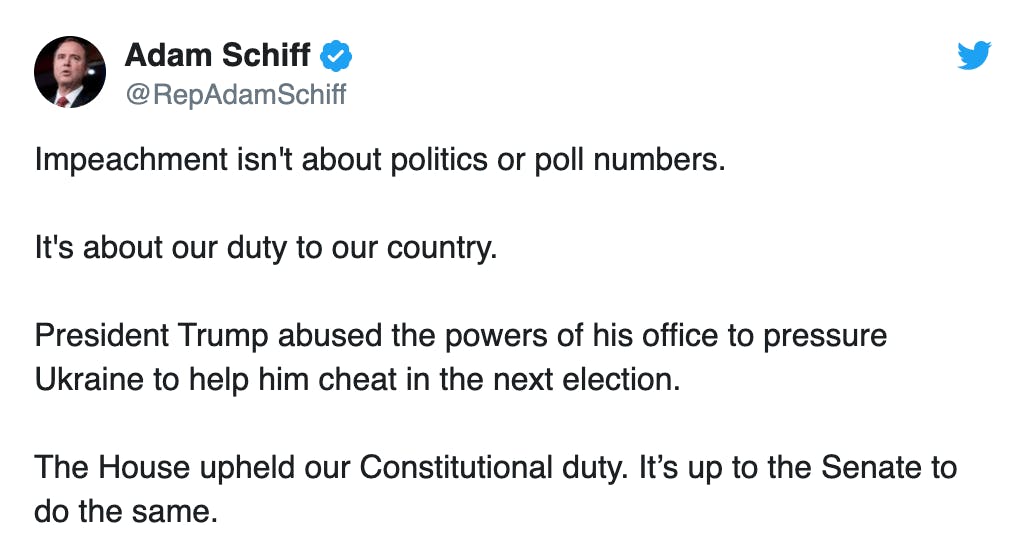 Behind him is Nadler, who put forth the articles of impeachment in the House.

The other impeachment managers consist of Democratic leadership, lawyers, Judiciary committee members, and even past impeachment participants. Rep. Hakeem Jeffries (D-N.Y.), Rep. Val Demings (D-Fla.), Rep. Zoe Lofgren (D-Calif), Rep. Jason Crow (D-Colo.) and Rep. Sylvia Garcia (D-Texas) will all have the opportunity to play a hand in convincing the Senate to remove the president from office.

Lofgren is perhaps the most experienced representative in terms of impeachment. Starting in 1974, she helped draft the charges against Nixon. Fast forward to the next impeachment during Clinton’s presidency, Lofgren served on the House Judiciary Committee, the New York Times reports.

Jeffries was also a likely pick due to his leadership within the party. He is a Judiciary committee member who some see as a future Speaker of the House, Politico reports.

Demings and Garcia were unexpected moves by Pelosi. While Demings does not have experience in the court of law like many previous impeachment managers, she does come from a background of law enforcement. She is the former Orlando chief of police who works with both Schiff and Nadler on the Intelligence and Judiciary committees. 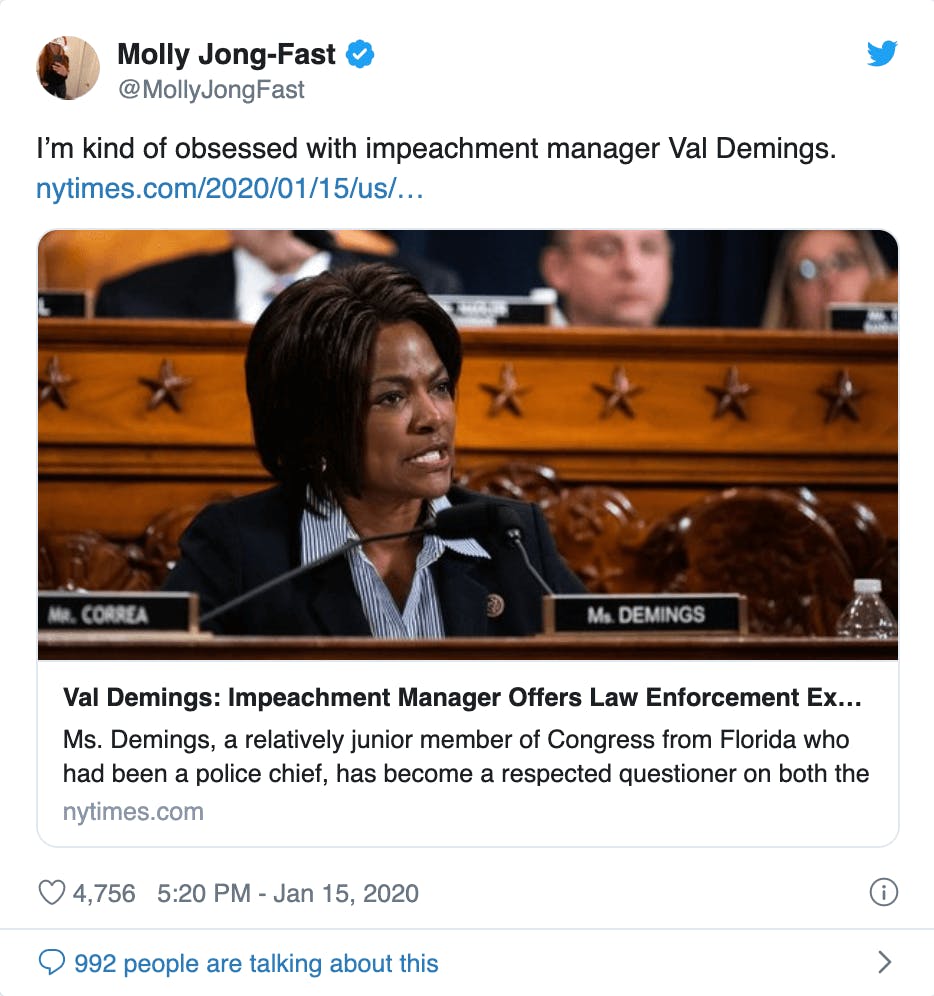 Garcia is also on the Judiciary Committee as a freshman congresswoman. The former judge could draw attention from her fellow Republican Texans in the Senate.

Last is one of the most surprising choices. Crow does not sit on either the Intelligence or the Judiciary Committee that took part in investigating Trump. Deemed the “national security freshman,” the former Army captain wrote an op-ed in September calling for the impeachment of the president.

What is next in impeachment?

Before now, no one knew what Trump’s fate looked like because Pelosi unprecedentedly withheld the articles of impeachment from the Senate. But now that there is some movement in the House, Trump’s trial looms over the White House.

“The only thing Speaker Pelosi has achieved with this sham, illegitimate impeachment process, is to prove she is focused on politics instead of the American people. The Speaker lied when she claimed this was urgent and vital to national security because when the articles passed, she held them for an entire month in an egregious effort to garner political support. She failed and the naming of these managers does not change a single thing. President Trump has done nothing wrong,” the White House said in a statement reported by the Daily Caller.

Last night, the impeachment managers walked to the Senate to present the articles of impeachment. Following that, Roberts, as well as the senators will be sworn in for a trial.

Then, the impeachment managers will argue their case for impeachment in front of the Senate, the president, and the American people.

The Senate impeachment trial could begin anytime after tomorrow, but the Senate is preparing for next week.