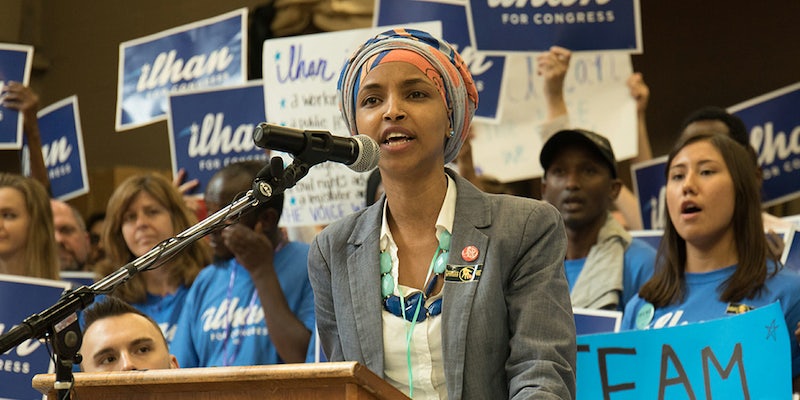 Yesterday, Ilhan Omar won the Democratic primary for Minnesota’s fifth congressional district. If she succeeds in November, she could become the first-ever Muslim woman elected to Congress (another Muslim woman in Michigan, Rashida Tlaib, is also running for the House).

That is cool. America has been in the grips of Islamaphobia since (basically) the first Gulf War, and that people are moving past that to try and bring about diverse voices to a democracy (which is what you want a democracy to be) is objectively great.

Unless you are a far-right conservative who believes that one person out of 438 people will bring about the end of the United States, instituting :screaming-cat-emoji: the United States of Islam.

It’s not gonna happen, but look at these folks freaking out over a little bit of diversity.

(But before we begin, a friendly reminder that Omar was … voted for. By voters. American voters. Who did democracy.)

This is the hatred our government has imported.

This women won her primary in Minnesota, United States of America. pic.twitter.com/lQOdRRD0uF

Objectively analyzing the actions of nation-states through a lens other than Judeo-Christian values? We should all rather just be dead.

I once embraced all religions as different facets of the same diamond. In the sunset of my life I've realized that some beliefs have taken God as an excuse to obtain power thru submission and fear in God's name. That is true evil. Islam is one of them. I hope she loses.

And yet hoping she loses is better than some responses, like those who called for President Donald Trump to intervene in Minnesota’s congressional elections.

Save the republic from Sharia law by instituting … a dictatorship.

I spent the day crying too. A very sad day in America.

It is truly sad when the results of a free and fair election don’t go your way. But it’s a sad day for you. Not a sad day for America. For in America, the millions of Muslims who live here get to see a representative of their religion have a voice in a Congress that routinely votes to bomb the countries they used to call home.

But back to the upset people. They are very upset, they want you to know.

She proves you can be antisemitic yet go to DC and represent a district in this country. There is a deep disconnect when an unapologetic hater is applauded by the lost left. Be better Minnesota. Wow
"Ilhan Omar" https://t.co/79Y0pZbjSu

THERE IS NO PLACE FOR A MUSLIM IN THE ELECTED OFFICIALS OF THE USA! IT IS IDEOLOGICALLY UNSOUND AND ANTI AMERICAN.

He’ll become the first Somali man to be elected to a state house.

Goal of the Muslim Brotherhood is to infiltrate our Gov't, implement Sharia & destroy us from within! pic.twitter.com/PysHsFVmBL

Calm down. America will be fine, in fact better, because of this.