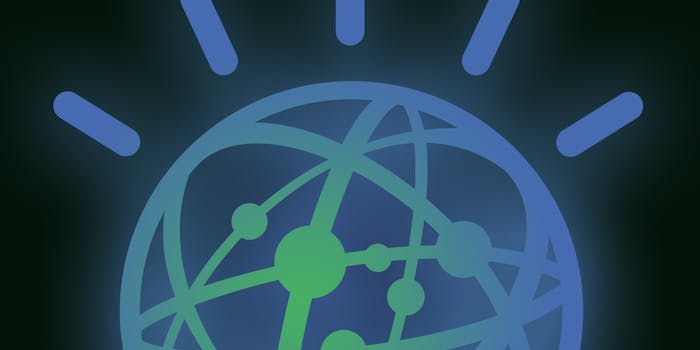 Everything IBM’s Watson is being used for now

What's that genius robot been up to? Plenty, actually.

You’re probably most familiar with Watson as the Jeopardy!-playing robot who destroyed humanity’s smartest quiz show players and make us all feel inadequate as a species. But it’s more than just the ultimate tool in pub trivia.

IBM announced earlier this month that the cloud-based data processing service Watson Analytics is now open to everyone as a public beta. The service will put analytics tools in the hands of anyone, allowing people to utilize Watson’s vast number-crunching skills to analyze information, pick out trends, and perform predictive analysis. Watson Analytics is part of IBM’s ongoing mission to turn Watson into a commercial venture.

But Watson has already been put to use in a variety of ways. Take a look, and then ask yourself what Ken Jennings has done for you lately.

The Health and fitness tech sector is experiencing huge growth and Watson wants in on the action. A startup called Pathway Geonomics wants to sequence your genes and use Watson’s advanced analytical capabilities to create personalized health recommendations—everything from what to eat to how to work out.

In a blog post, chief medical officer for Pathway Geonomics Michael Nova described the possibilities of the app.

“Say you’ve just flown from your house on the coast to a city that’s 10,000 feet above sea level. You might want to ask how far you could safely run on your first day after getting off the plane—and at what pulse rate should you slow your jogging pace.”

Nova hopes to have the app, dubbed Pathway Panorama, ready for the public by mid-2015.

A similar app has been in development at Welltok. Dubbed CafeWell Concierge, the app will utilize Watson’s wealth of knowledge to make health recommendations based on a personal health itinerary. If you’re out of town and need to stick to a specific diet plan, the app will find nearby restaurants that fit your restrictions. When released, CafeWell Concierge will be a premium offering for those who have health care that offer the service.

Before being utilized for day-to-day maintenance-style health decisions, Watson was put through medical school to help make decisions on cancer treatments. 1,500 lung cases along with over two million pages of medical journals, textbooks, treatment guides were poured into the brain of Watson for it to process.

To test how well the knowledge took, doctors questioned Watson and corrected it when it gave incorrect answers. The end result is a more refined understanding of the disease and treatments for it, enabling Watson to assist in assessing new cases.

Maine Center for Cancer Medicine and WestMed in Westchester County, N.Y. are the first two medical groups to adopt the program. Doctors at those institutions can call upon Watson via computer or tablet and let the machine rake through piles of patient records to find relevant information and assist doctors and nurses.

Watson’s first gig after his run crushing fleshy bags of meat on Jeopardy! was a collaboration with health insurer WellPoint. The computer was given the probably boring but extremely valuable job of helping review treatment requests. The involvement of IBM’s creation helps to improve the quality of care provided to patients and reduce overall costs.

The process was slow, but Watson has become a part of the daily work at WellPoint. After learning a considerable amount of information about treatments, then processing the tedious policies of the health insurance provider, Watson has become an asset in solving problems. It reviews the requests and recommendations for treatment from doctors and makes sure they meet both the company guidelines and the specific policy of the patient.

The first consumer-facing project to feature Watson put it to work navigating the nearly endless amount of text put in front of military members before they transition back to civilian life. There are over 3,000 documents dealing with the transitional period, which is an overwhelming amount of information for a person but not for Watson.

The USAA tapped IBM’s Watson Engagement Advisor for the project, a program allowing users to ask Watson questions in common language—essentially the same technology that allowed Watson to respond to questions on Jeopardy! Everything from how to get access to benefits from a specific program to basic job application questions like “How do I write a resume?” will generate a response and will help make the move back to civilian life easier.

Plenty of us have worked in the food industry; so has Watson. The supercomputer strapped on an apron and slaved away at a stove for awhile at the Institute of Culinary Education in Manhattan.

After reading over 20,000 recipes and digging into the chemistry of various ingredients, Watson—ever the crowd-pleaser—broke down the ratings of different flavors to better understand what people like. Watson was then given different culinary challenges to see what he could create. Tasked with inventing a breakfast pastry that combined unusual ingredients, was healthy, and influenced by Spanish cuisine, Watson cooked up the Spanish crescent. The final product included honey, cocoa, almonds, saffron, and black pepper, and opted to replace butter with vegetable oil to keep things on the healthy side.

Of course, Watson didn’t actually do the cooking—that was done by James Briscione, the chief instructor at the school. So you don’t have to worry about a robot spitting silicon in your food.

Watson could also be making its way to your kitchen thanks to a partnership with food publication Bon Appétit. Currently in an invite-only beta, a Web app called Chef Watson will give homebound chefs the chance to use Watson’s intellect to the satisfaction of their stomach. Give Watson ingredients, dish type, style, and other variables and it will produce hundreds of concoctions, all with step-by-step instructions on how to make them.

If your current go-to option for shopping help is taking a picture in the dressing room and asking your friends if it looks OK, then you will likely appreciate Fluid’s application of Watson.

Starting with a storefront designed specifically for North Face, Watson will be put to work as a salesperson helping shoppers pick out the perfect jacket, except Watson doesn’t work on commission and won’t try to throw accessories in your bag at the register.

Users will tell Watson preferences and information—everything from where they live to what type of fit they prefer to likes and dislikes about specific types of jackets. From that data, Watson will snag the ideal outfit off the rack. If all goes well, a more full-featured app is set to debut next year.

DBS Bank, a sizable financial services group in Asia, tapped Watson to do the near impossible task of making banking a simple and understandable process for customers. Using the cloud-based Watson Engagement Advisor solution, DBS Bank hopes to give its patrons a better overall experience and help the managers in its wealth management business offer better advice to clients.

Watson won’t be giving or taking money—it’s not just going to be some glorified ATM that can talk. Instead, it will be analyzing an incredible amount of data related to financing, digesting it so it can answer questions, and putting it to use to insure the best course of actions are being followed. It’ll surely beat the endless pile of tri-fold pamphlets that banks usually hand out.

Often when you call customer service, you’ll be told either by pre-recorded message or by the agent on the line that the call with be recorded for quality assurance. It’s an innocuous enough statement, but it means there’s an additional party that will have to listen to your entire call and review it to make sure you were given sufficient service and to spot any areas that can be improved in future calls.

There has never been a customer satisfied with over the phone service and there has never been a support member who has found a customer to be patient and reasonable. The third party in this equation has to experience both sides of unpleasantness. It’s not an enviable job, nor is it particularly effective any longer given the amount of support that stems from social media, so Genesys is giving it to Watson.

The supercomputer will be tasked with dealing with the piles of information pouring in from all sorts of channels that standard systems are unable to quantify. Information gleaned from Watson’s analysis will be used to improve customer-facing services, from support to sales to marketing.