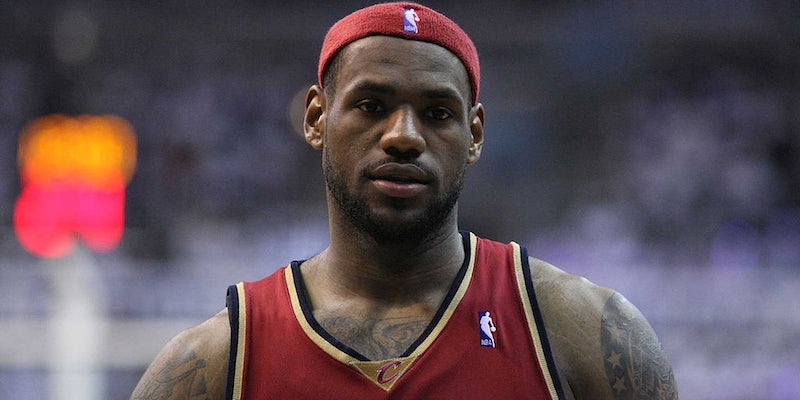 In defense of the Internet's most hated typography.

While warming up for last Saturday’s game against the Golden State Warriors, Chicago Bulls point guard Derrick Rose donned a black t-shirt emblazoned with the phrase “I can’t breathe.”

Those were the last words spoken by Eric Garner, an African American man who was fatally strangled by a white New York City police officer while being arrested for allegedly selling loose cigarettes on a Staten Island street corner. A grand jury’s decision not to indict the officer involved sparked nationwide protests that seized on “I can’t breathe” as a unifying rallying cry.

Kobe Bryant and the Lakers all wear “I Can’t Breathe” tees before tonight’s game https://t.co/cdkUdCpjVZ pic.twitter.com/r6a3O67eTR

As the New York Times reports, the shirts spread across the NBA in just a few days. They were spotted on everyone from Cleveland Cavaliers superstar LeBron James to nearly the entire roster of the Los Angeles Lakers. The shirts, which were designed by the activist social justice group Justice League NYC and distributed to players with the help of hip-hop mogul Jay-Z, made an immediate splash.

For generations, professional athletes have largely been shaped into apolitical brands encouraged to tiptoe around anything remotely controversial, lest they alienate some fans and decrease jersey sales or miss out on lucrative endorsement deals. A significant number of NBA stars joining in a unified protest against one of the most divisive political issues of the year—and the league agreeing not to fine them for doing so—is a pretty big deal.

Unsurprisingly, not everyone was happy with the shirts. There was some griping from the shut up and dunk crowd, but a significant number of people had problems with the shirts for reasons other than their anti-police-brutality message. Amazingly, many people were unhappy that the shirts were written in Comic Sans.

I'm all for the "I Can't Breathe" shirts, but some of those New York cops had to be behind them using Comic Sans as the font. #Fail

I Can't Breathe BECAUSE COMIC SANS!

People really hate Comic Sans. They really, really do. It’s a visceral, unthinking kind of hate—especially given that it’s directed at something as seemingly innocuous as a font. When it comes to the things people on the Internet hate, Comic Sans is right up there with Comcast customer service and websites that unexpectedly auto-play loud video advertisements.

Sure, that nit-picky criticism is valid. However, in another sense, Comic Sans is actually a perfect choice for the shirts.

Comic Sans was created in 1994 by designer Vincent Connare, who was working on a long-forgotten Microsoft program called Bob. Connare’s program was supposed to help use the Windows operating system in an intuitive way.

In a post on his personal website, Connare explained that, when users first opened Bob, they were greeted by a cartoon dog that explained how to sign into the program. The text in the dog’s speech bubble was initially written in Times New Roman, but Connare thought it looked too formal to represent how a yellow, floppy-eared cartoon dog would greet a new visitor. 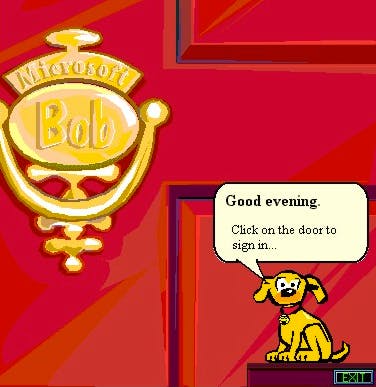 Drawing inspiration from the lettering in comic books—particularly Frank Miller’s dark, gritty take on Batman, The Dark Knight Returns— Connare created Comic Sans. “Comic Sans was NOT designed as a typeface,” he explained, “but as a solution to a problem with the often overlooked part of a computer program’s interface, the typeface used to communicate the message.”

Connare’s new font didn’t end up making it into Microsoft Bob, but it was adopted by other Microsoft programs like Movie Maker and Windows 95. Two decades later, Comic Sans is available as a font almost anywhere anyone could want to use it. Even design-obsessed Apple created its own Comic Sans knockoff called Chalkboard.

The font’s ubiquity has generated considerable backlash. Holly Combs, the graphic designer behind the website BanComicSans.com, told The Independent:

Comic Sans just isn’t designed well. It was never made to be printed and yet it is everywhere I look. Hardly a day goes by when I don’t see in an inappropriate setting. I would just appeal to people to be more thoughtful. When I get an invitation to the funeral of a friend and it is written in Comic Sans, I just find that thoughtless. It is an epidemic.

The question remains: Why would someone use Comic Sans? “Because,” Connare insists on his website, “it’s sometimes better than Times New Roman.”

One instance in which the undignified Comic Sans outperforms the serious Times New Roman is when a writer wants his or her readers to vividly remember what he or she wrote.

A 2011 study by researchers from Princeton and Indiana University found that information retention improves when it is presented in a font that is “hard to read,” because making sense of an ugly font typically requires more concentration. The study’s authors noted that test subjects who read text written in Comic Sans remembered the text better than those who read the words in Times New Roman.

“I can’t breathe” isn’t exactly a complicated message to remember, especially when it’s splayed across the chests of some of the most famous people in America. Even so, printing the text in Comic Sans makes it even more memorable, at least on a subconscious level.

At the same time, there’s something that always feels handmade about things written in Comic Sans, because, at its core, Comic Sans is a typeface intended to approximate human handwriting. Looking at the shirts worn by the NBA stars, one can’t help but feel like the decision to both make and wear them was something intensely personal.

If the shirts looked more professional—like they were a part of a slick advertising campaign—their effect would have been muted. The font choice made the shirts seem like something thrown together by a group of people who wanted to make a statement, rather than part of an organized campaign. The only way the shirts could have communicated that message more effectively is if “I can’t breathe” were written in Sharpie by the players themselves.

The design of the shirts made it seem as if the players were in engaged in a form of protest, like the demonstrators out in the streets of New York City or Berkeley, Calif. That was precisely the designers’ intention.

Comic Sans may be ugly, but in this case, it helped get people’s attention. The font is an apt metaphor for the often-anarchic street demonstrations that have rocked the nation in recent weeks: They may have been rough around the edges, but they undeniably got the country’s attention.