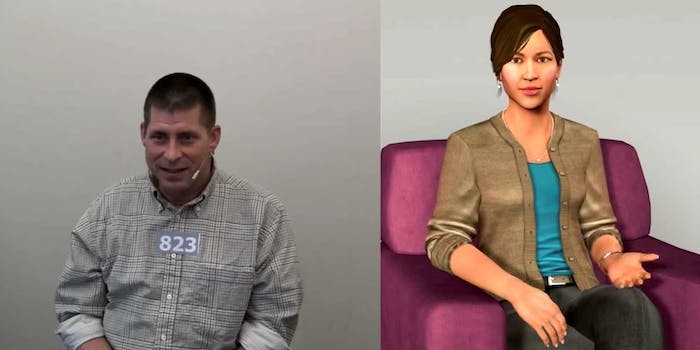 According to a new study published in the journal Computers In Human Behavior, people are far more likely to confide intimate details to a virtual human than a real one. The paper, “It’s only a computer: Virtual humans increase willingness to disclose,” publishes what may be the first scientific evidence that virtual humans (VHs) could actually improve clinical screenings.

Researchers at the University of Southern California (USC) recruited 239 adult subjects to a lab where they would participate in an intake appointment meant to simulate a clinic or hospital protocol. The pool of subjects, split in half, as either told they’d be interacting with a VH interviewer (a computer simulation) or a human. The virtual human software, called SimSensei, is designed to pick up on cues for depression, among other possible mental health maladies.

According to the study’s results, summarized in the abstract:

The study could have pretty compelling implications both within health and beyond it (seen Her?). As automated health services and other forms of e-health technology gain traction in the industry, seeing some evidence that virtual interaction actually yields positive outcomes is heartening. The only slightly unsettling catch? The research was funded by DARPA.

The video below goes into more detail about the nuances of the SimSensei system, which dynamically adapts to subject behavior in real time.