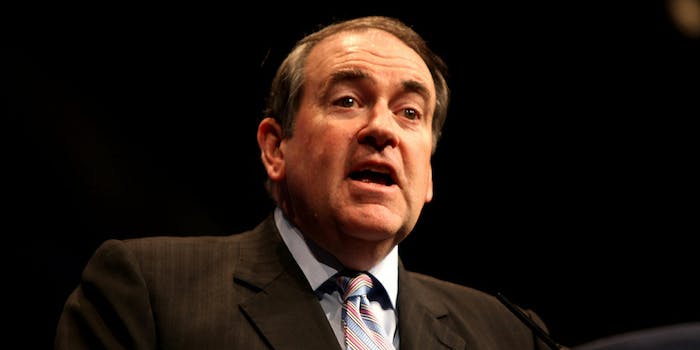 Former governor and Republican presidential candidate Mike Huckabee said he couldn’t recall the infamous Access Hollywood tape where President Donald Trump admitted that he sexually assaulted women by grabbing them “by the pussy.”

“I don’t recall that that’s ever happened,” Huckabee said, shaking his head back and forth. “But I do recall that Bill Clinton lost his law license. He was impeached. He admitted that he lied under oath and that there had been a number of women who have never been disproven to be wrong about their allegations regarding him.”

Trump was caught on a hot mic describing how he gropes, kisses, and tries to have sex with women, including his assertion that when you are a “star,” that women “let you do it.” The video was released in October 2016, but taped in 2005.

In the video, Trump tells Access Hollywood host Billy Bush that he can “do anything” to women because of his fame and says he can even “grab them by the pussy.”

Trump has also been accused of sexual assault by numerous women.

One woman, Summer Zervos–a former contestant on his show The Apprentice–has subpoenaed Trump’s campaign for all documents related to her, all communications about her and any documents that concern women who have accused Trump of sexual misconduct.