How to use Snapchat’s all-new voice calling, audio messages, and sticker packs

You can even leave an audio message when your friends are away.

In a new app update, the company rolled out voice and video calling features, so you can call your friend through Snapchat using data or Wi-Fi. Leaked screenshots back in January hinted at some of these features, and now they’re available for everyone.

Snapchat is joining apps like Skype, Hangouts, and WhatsApp in letting you chat with friends without dipping in to any of your minutes. Snapchat will also now let you leave audio messages if your friend is away that will disappear after they hear it.

Additionally, Snapchat is adding stickers to chat, joining Facebook Messenger and Line in appealing to young people who want to talk with cartoons instead of just emoji. With the addition of stickers, Snapchat’s Bitstrips acquisition makes plenty of sense, and it’s likely you’ll be able to make your own sticker avatar eventually. 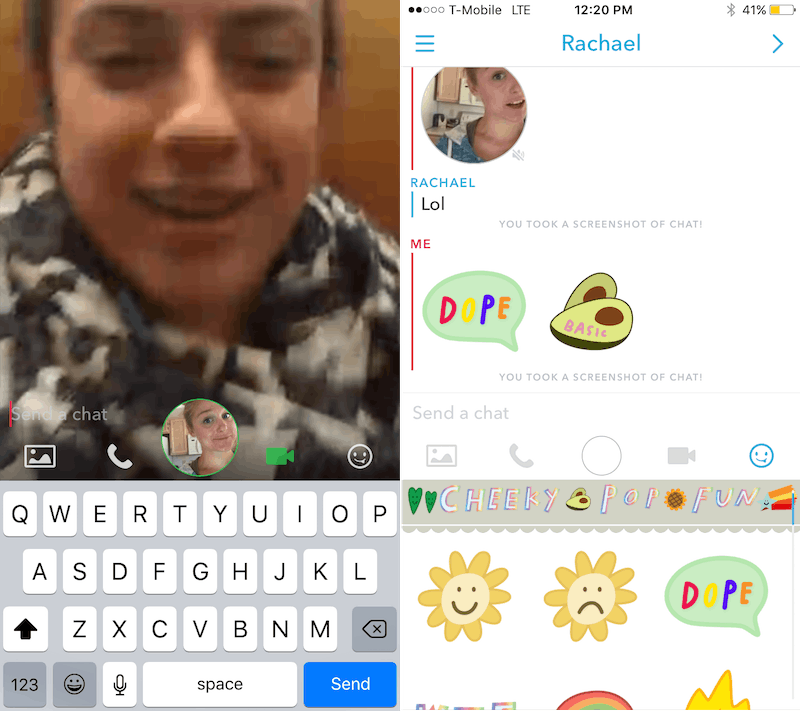 To access the new features, make sure your Snapchat app is updated to the latest version, and then go into a private chat with one of your friends.

A new menu at the bottom features new phone and video icons; simply tap on each to make a call. It’s super seamless to go back and forth between audio and visual calls while you’re talking to a friend. Tapping on the phone hides the video, and tapping on video brings up the front-facing camera.

Stickers live on the right side of the chat menu, and there are 10 sticker packs automatically built in to the chat. Tap on the emoji to access stickers, and scroll vertically to access all the packs.

Snapchat is calling the updates “Chat 2.0,” but really they’re just catching up to the full-service apps that exist already. Now you can do much more with Snapchat than just capture and view photos and videos that disappear—it’s making engaging with friends in real-time much easier.