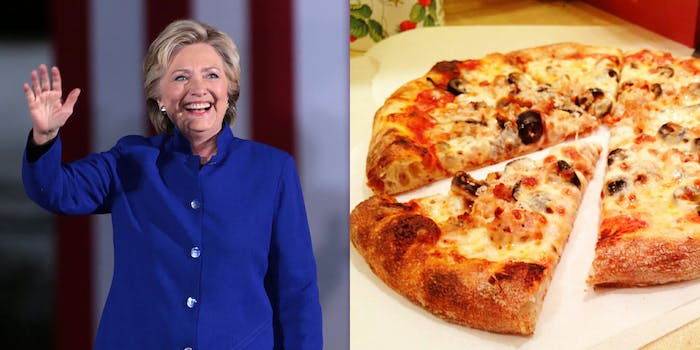 The so-called 'pizzagate' conspiracy got out of hand.

During a publicity stop to promote Clinton’s new book, What Happened, bookstore owner Lissa Muscatine told a crowd that Clinton and her husband, former President Bill Clinton, bought pizzas from Comet Ping Pong and sent them to a local after-school literacy program.

The purchase came days after 28-year-old Edgar Welch opened fire in the pizzeria on Dec. 4, 2016, after the spread of false claims online that Clinton was part of a child sex ring that was run from the basement of the restaurant. Welch fired an AR-15 into the restaurant but did not injure anyone.

“I told you what was going on and you responded instantly and were so supportive,” Muscatine said, according to the New York Daily News. “A few days after that, you and your husband said, ‘What can we do to support Comet?’”

“You bought I don’t know how many pizzas, but a lot of pizzas, and sent them … to an after-school literacy program in D.C., which was never publicized,” Muscatine continued, according to HuffPost.

Following the shooting, Comet Ping Pong’s owners launched a GoFundMe campaign to help recover the lost revenue that resulted from disruptions related to the incident. The campaign raised more than $28,000.

The so-called Pizzagate conspiracy gained traction during the presidential election on dark corners of the internet based on rampant speculation inspired by the content of leaked emails stolen from Clinton’s 2016 campaign chairman, John Podesta. Essentially, people believed the emails, released by WikiLeaks, included “code words” that supported the idea that a child sex ring was run out of Comet Ping Pong.

The conspiracy theory quickly spiraled into communities like 4chan, Voat, and Reddit. The theory was further perpetuated by InfoWars personality Alex Jones, a move for which he later apologized.