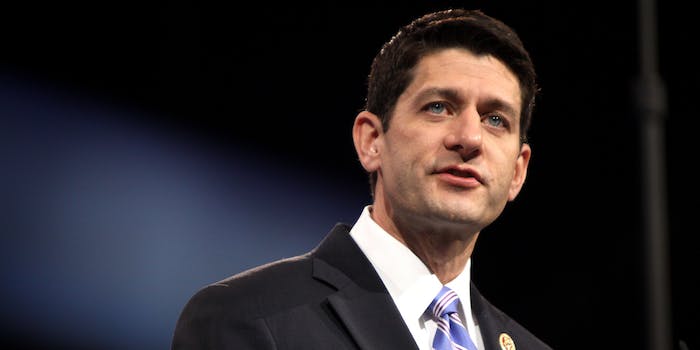 “No one should be above the law.”

After a day in which the Republican Party seemed stuck in the mud, unable to form a sharp and coherent response to news presidential-election rival Hillary Clinton would not face an indictment over her use of unsecured email, the house speaker—however tardy—has taken it upon himself to strike the decisive blow by formally challenging Clinton’s security clearance.

In a letter to James Clapper, the Director of National Intelligence, Ryan, a Republican congressman from Wisconsin, requested that Clinton be prohibited from receiving the classified intelligence briefings typically given to presidential nominees. Former Secretary of State Clinton is the Democratic Party’s presumptive nominee and will almost assuredly receive her party’s nomination in Philadelphia three weeks from now.

“Today I am writing to formally request that you refrain from providing any classified information to the former Secretary of State Hillary Clinton for the duration of her candidacy for president,” Ryan wrote.

A spokesperson for the Office of the Director of National Intelligence told the Daily Dot that Clapper had received Speaker Ryan’s letter and would respond to him directly.

Attorney General Loretta Lynch announced on Wednesday that she would accept the recommendations of FBI investigators, who, after reviewing approximately 30,000 State Department emails, determined the actions of Clinton and her staff, while “extremely careless,” did not warrant criminal proceedings.

Lynch had stated that she would accept the advice of the Federal Bureau of Investigation after public controversy arose last week from an apparently unplanned rendezvous aboard a private plane with former President Bill Clinton.

In a statement Monday, FBI Director James Comey said that “no reasonable prosecutor” would bring criminal charges against the former State Department employees who routinely exchanged classified information over a series of private email servers. “While I respect the law enforcement professionals at the FBI, this announcement defies explanation,” replied Ryan, adding: “No one should be above the law.”

In requesting Clinton’s security clearance be revoked, Ryan, a former Republican nominee for the vice presidency, drew on his own experiences as a candidate. “I am keenly aware that Secretary Clinton is set to begin receiving classified intelligence briefings after the Democratic National Convention,” he wrote. Ryan went on to cite Comey, who after declining to recommend charges two days before, said of the Bureau’s determination: “This is not to suggest that in similar circumstances, a person who engaged in this activity would face no consequences. To the contrary, those individuals are often subject to security or administrative sanctions.”

Retweet to agree → The DNI should not provide classified briefings to Secretary Clinton. pic.twitter.com/JW4jU31xJr

Testifying before Congress on Thursday, Comey defended his decision not to pursue criminal charges against Clinton and her staff. “I see evidence of great carelessness,” he said. “But I do not see evidence that is sufficient to establish that Secretary Clinton or those with whom she was corresponding both talked about classified information on email and knew when they were doing it that it was against the law.”