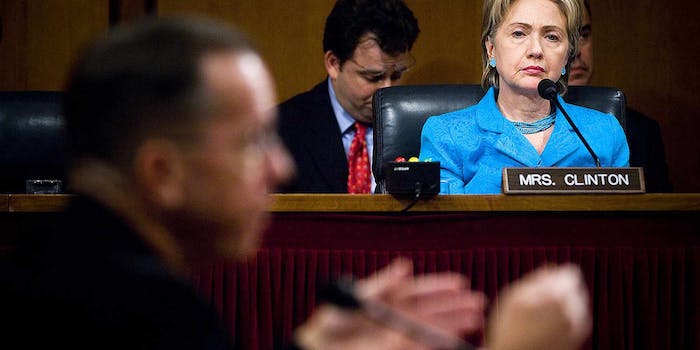 Get it? It's because she's a woman that expresses opinions.

With the GOP‘s shellacking of the Democrats in last week’s midterm elections, everyone can now turn their attention to quaking with sheer terror at how terribly dumb the 2016 presidential election is going to be.

If you’re not convinced the presumptive matchup between Hillary Clinton and either Ted Cruz, Rand Paul, or whatever Bush still hasn’t been president yet will degrade into the worst kind of knee-jerk, hyper-partisan buffoonery, may I present you with Exhibit A: the Hillary Clinton Nutcracker currently being sold at Urban Outfitters.

Yes, straight from a joke Rush Limbaugh started telling the year Miley Cyrus was born, comes a reference to the former Secretary of State being a “ball buster.”

Just how stale is the joke? Urban Outfitters originally sold the doll back in 2008.

The toy is obviously sexist and—while Urban Outfitters CEO is a right-wing, Rick Santorum-supporting billionaire, the store’s customer base skews relatively young and progressive—meaning that most purchases of the nutcracker will probably be, at some level, ironic. While the Hillary Clinton nutcracker is self-consciously meant to be painfully sexist, the joke underlying isn’t even really clever enough to warrant taking offense to.

However, a critical mass of people taking offense is exactly what Urban Outfitters hopes will happen.

When the company sells merchandise like a blood-spattered Kent State sweatshirt or a pro-anorexia t-shirt bearing the slogan “eat less,” the goal is to generate outrage. Millennials are bombarded with messages from brands trying to get their attention ever few seconds. A major clothing retailer putting out so something blatantly offensive, even in a limited run, is an effective and cynical way to remind young people that, yes, Urban Outfitters still exists and is happy to take their money.

Amazon also sells the Clinton nutcracker; but, since the products Amazon offers are far less curated than those sold by Urban Outfitters, its hard to ascribe nearly as much agency or intentionality to the Seattle-based ecommerce giant’s stocking decisions.

In essence, getting offended by the doll is just letting the trolls win. But, in another sense, the toy shows that the level of discourse that’s swirling around the former First Lady hasn’t exactly elevated itself in recent years.

But, then again, maybe it isn’t just Hillary, her husband has gotten the dumb toy/cooking utensil treatment too.