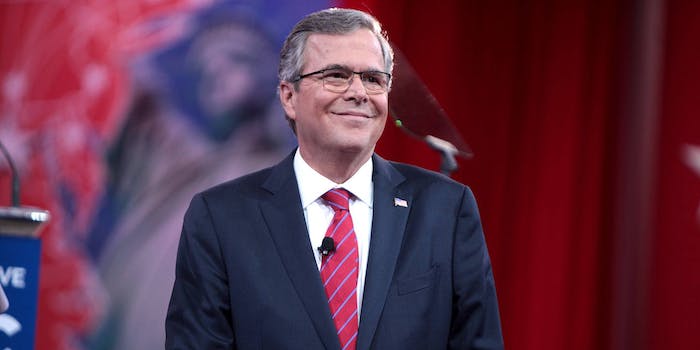 ...And then Scott Walker chimed in.

Ever since the Center for Medical Process began releasing undercover videos of Planned Parenthood and alleged it was selling fetal tissue for a profit, candidates gunning for the Republican presidential nomination have been adamant about wanting to defund the women’s health organization.

So, when Jeb Bush said Tuesday that Planned Parenthood should not receive money from the federal government, it was absolutely no surprise. But what he said afterward—that he wasn’t sure the government needed to spend as much as $500 million for women’s healthcare issues —certainly upset Hillary Clinton, who bashed Bush on Twitter. Then, not surprisingly, another Republican went after Clinton. And on and on it goes.

First, here’s what Bush said Tuesday at a Southern Baptist convention in Nashville.

.@HillaryClinton what’s absolutely, unequivocally wrong is giving taxpayer $ to an org whose practices show no regard for lives of unborn

Good debate there, but the political media is referring to Bush’s question regarding the $500 million as a gaffe, and it’s hard not to agree with that, especially since Bush almost immediately had to release a backtracking statement on his website.

“With regards to women’s health funding broadly, I misspoke, as there are countless community health centers, rural clinics, and other women’s health organizations that need to be fully funded. They provide critical services to all, but particularly low-income women who don’t have the access they need.

“I was referring to the hard-to-fathom $500 million in federal funding that goes to Planned Parenthood – an organization that was callously participating in the unthinkable practice of selling fetal organs. Democrats and Republicans agree we absolutely must defund them and redirect those funds to other women’s health organizations.”

So, I think we all can agree that what Bush said, while perhaps not the smoothest approach he could have taken, should continue the debate on what has become a tense issue, while, at the same time, making sure that…

Oh, Scott Walker, you had something to say about this Clinton-Bush brawl?

.@HillaryClinton is proud to stand with Planned Parenthood. For that she ought to be ashamed. – SW

By saying she stands by Planned Parenthood, @HillaryClinton proves once again that she's #OutofTouch with everyday Americans. – SW

Clinton, for what it’s worth, already had targeted Bush and Walker in a recent video in which she said, via Business Insider, “Republicans like Scott Walker and Jeb Bush are calling to defund Planned Parenthood, the country’s leading provider of reproductive healthcare, If this feels like a full-on assault on women’s health, that’s because it is.”

Unfortunately for those who love their politics with a big ol’ side of verbal boxing, Clinton will not be at the Republican debate Thursday. But Bush and Walker will be. Don’t be surprised if this issue is brought up by the moderators. It should be a rollicking good time.