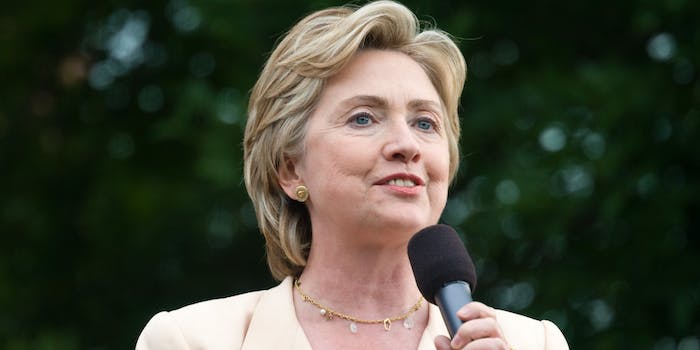 Clinton may already have the nomination in the bag—but not according to Bernie Sanders.

New Jersey awards a total of 126 pledged delegates, which are awarded to candidates based on Tuesday’s vote. Clinton’s New Jersey win stands to increase her lead by at least 63 pledged delegates, although the actual number will differ depending on the total vote tally at the district and state levels.

Clinton’s victory comes one day after the Associated Press and NBC News reported that Clinton has secured support from enough superdelegates to push her over the 2,383-delegate threshold needed to win the Democratic nomination. According to the AP tally, Clinton has exactly 2,383 total delegates to Sanders’s 1,569.

The news outlets based their delegate count by interviewing superdelegates about whom they support. Because superdelegates are not officially committed to a candidate until they cast their ballot at the Democratic National Convention, which begins in Philadelphia on July 25, many have questioned the outlets’ move to declare Clinton the presumptive nominee, including the independent Vermont senator’s campaign.

“It is unfortunate that the media, in a rush to judgment, are ignoring the Democratic National Committee’s clear statement that it is wrong to count the votes of superdelegates before they actually vote at the convention this summer,” Sanders campaign spokesman Michael Briggs said in a statement issued on Monday.

Clinton’s campaign also chafed against news of her reported delegate count, stating that voters in the six states to cast ballots on Tuesday must still make it out to the polls.

Sanders’s notion that Clinton surpassing 2,383 total delegates—an historic achievement that would make her the first female presumptive presidential nominee of a major American political party—is invalid because it relies on support of unbound superdelegates contrasts with his stance in previous elections.

On June 3, 2008, then-Sen. Barack Obama secured the Democratic nomination over Clinton thanks to the support of both pledged delegates and superdelegates. Two days later—and two days before Clinton conceded to Obama—Sanders told the Burlington Free Press that he planned to “do everything I can to see that [Obama] is elected president,” arguing that he could help sway other independents to vote for the Democratic candidate.

But 2016 is different. The Sanders campaign argues that the vast majority of Clinton’s 571 superdelegates pledged their support well before Sanders stood as a viable challenger to the former first lady, U.S. senator, and secretary of state. Because of this, Sanders has vowed to remain in the race until Clinton officially receives the nomination at the party convention.

“Our job from now until the convention,” Briggs added, “is to convince those superdelegates that Bernie is by far the strongest candidate against Donald Trump.”