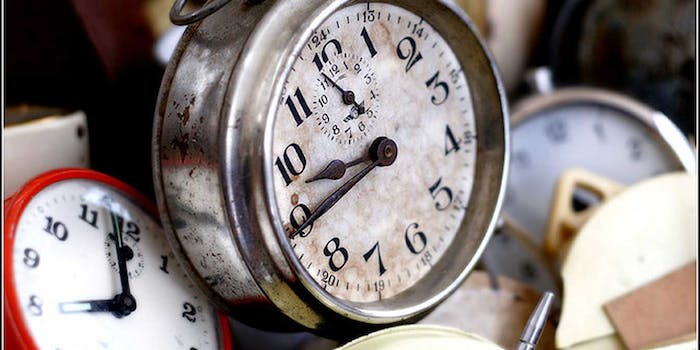 The hidden cost of being online

Findings from a new study suggest that for every hour we spend online for leisure pursuits, we give up 16 minutes of work, seven minutes of sleep.

It’s hard to imagine now, but there was a time when people didn’t spontaneously check their phone for new tweets or spend hours spiralling down a Wikipedia rabbit hole.

For better or worse, such activities are now part of our daily routine. And it’s got at least one researcher wondering just what things are we giving up in order to be online.

Trawling through eight years of federal data, Scott Wallsten, an economist and researcher with the Technology Policy Institute, has finally put a precise number on the amount of time you and I give up when we forsake traditional offline activities for leisure time online.

Wallsten’s estimate, published in a recent paper for the National Bureau of Economic Research, is that for every hour we spend online for leisure pursuits, we give up 16 minutes of work, seven minutes of sleep, and 17 minutes for all other leisure activities. Wallsten told the Daily Dot that this “crowding out” of other tasks flies in the face of those who say the Internet mostly serves to boost the economic activity by enhancing productivity.

Wallsten’s found, not surprisingly, that the amount of leisure time American’s spend online has steadily gone up over the past decade. From 2003 to 2011, the amount of time spent on the Web for this purpose has nearly doubled from eight minutes to 13 minutes a day, while the average American’s daily leisure time remains fixed at roughly five hours.

Now, this amount of online time may seem absurdly low. But the definition of “online leisure” in Wallsten’s study only included activities like Web browsing and social networking. It did not, however, include such things as email and streaming video. That’s because of the way the data he used was catalogued. Wallsten derives his conclusions from the Bureau of Labor Statistics’ American Time Use Survey, which has been studying the way Americans divide up their time since 2003. The data also doesn’t take into account multitasking.

Even without including opportunity cost of the time most Americans spend watching YouTube videos or emailing friends, Wallsten is still able to paint a compelling portrait of how the Internet is altering our productivity and changing the way we interact with one another.

As an economist, Wallsten was interested in studying the financial impact of time online. The findings of the study suggest that there is a cost to being on Facebook and Twitter more, even if we never actually pay a cent to use these sites. The price comes in lost opportunities elsewhere. Teens spend 18 fewer minutes on their education for each hour online. Americans age 25-39 sacrifice roughly 20 minutes of work for an hour of Internet leisure.

“Be skeptical when you hear how much the Internet adds to economic growth,” Wallsten warned. “It has enormous economic effects, but many of those effects are transfers of economic activity from one area to another.”