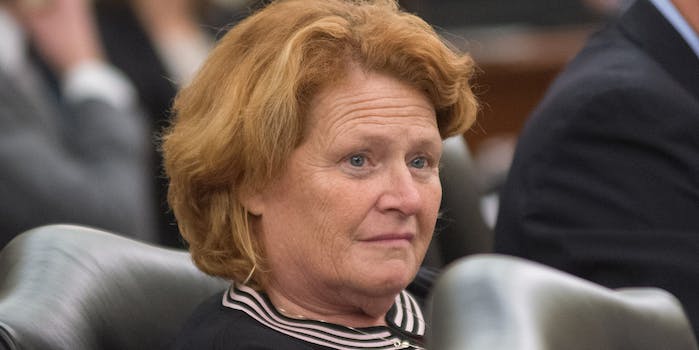 Sen. Heitkamp (D-N.D.), a former gas company executive, called for an end to the #NoDAPL protest.

Reuters is reporting what other news outlets have merely speculated on throughout the day: President-elect Donald Trump is considering Sen. Heidi Heitkamp (D-N.D.) for either an energy or interior cabinet position.

Either posting would place Heitkamp over an agency where its prospective policies will either continue the Obama administration’s march toward renewable energy, or instead reverse course in favor of oil, natural gas, and coal.

Heitkamp, former director of the Dakota Gasification company, would appear to be a hat trick for Trump: She could be used to bolster the president-elect’s bipartisan image; she is unlikely to challenge him when and if he does decide to walk back Obama’s renewable energy initiatives; and her Senate seat will almost assuredly be filled by a Republican in a special election. Moreover, it would likely prove difficult for her Democratic colleagues in the Senate to oppose the nomination.

Climate Hawks, a progressive super PAC that ranks Democrats on environmental issues, gave Heitkamp one of the lowest scores (-23) in 2015. She ranked only slightly higher than Sen. Joe Manchin of West Virginia (-26), who represents the country’s second most coal-producing state; and Sen. Claire McCaskill of Missouri (-29), who acknowledges climate change as a global crisis while simultaneously opposing many legislative efforts aimed at fixing it.

By comparison, Sen. Bernie Sanders, who is among the top “climate hawks,” scored a 95.

A Heitkamp nomination should trouble Americans who’ve taken the side of the Native Americans opposing the Dakota Access pipeline. The oil and gas industry was the top contributor to Heitkamp’s campaign, and it’s the industry that stands to profit by passing a pipeline under Lake Oahe near the Standing Rock Indian Reservation.

Heitkamp has recently been critical of the indigenous protesters, whom she has called “violent,” even as she remains silent on the critical injuries experienced by the so-called “water protectors” facing off with authorities. Earlier this year, Heitkamp praised Morton County Sheriff Kyle Kirchmeier’s handling of the conflict as “stellar,” while applauding his “calm.”

Heitkamp likewise praised the Army Corps of Engineers’ order to break up the protests this month as “a needed step to support the safety of residents, workers, protesters and law enforcement.”

Police at the site last week turned water hoses on the protesters after temperatures dropped below freezing. Kirchmeier’s office said the protest was an “ongoing riot.” And mostly-less-than-lethal weapons, including tear gas and rubber pellets, were fired into the crowd. According to the Washington Post, at least 26 people required medical attention for “gashes, internal bleeding and eye trauma.”

Heitkamp is scheduled to meet with Trump and Vice President-elect Mike Pence on Friday. “You guys know what I know,” she said, telling Politico: “The president-elect asked me to come for a meeting. I don’t even know it’s about a job. And we’re looking forward to having a very productive discussion.”

The senator appears at least to be keeping her options open: “Whatever job I do,” Heitkamp said, “I hope to work with the president-elect and all of my colleagues in Congress on both sides of the aisle to best support my state.”