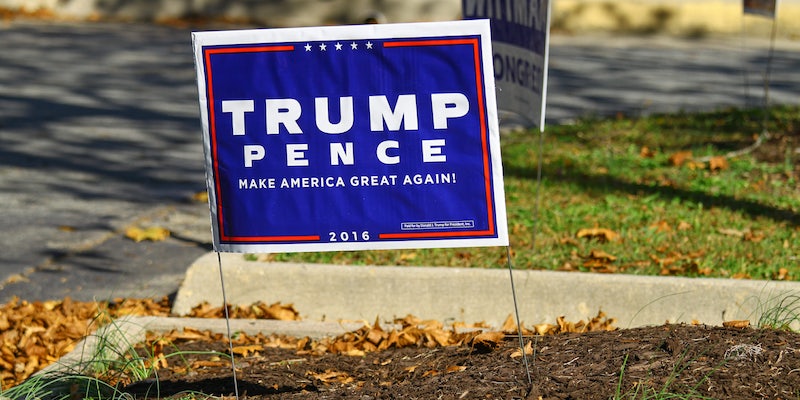 State attorneys have decided not to prosecute two Baltimore-area women on arson and hate crime charges stemming from an incident where they allegedly lit a “Make America Great Again” sign on fire, court officials tell the Daily Dot.

D’Asia R. Perry and Joy M. Shuford, both 19, were arrested in connection to the incident last week. Authorities alleged that the two women “intentionally set the billboard on fire due to political differences with the billboard postings.”

Perry and Shuford were charged with arson and committing a hate crime—but state officials have decided not to prosecute those charges, Somerset County District Court clerks told the Daily Dot.

Officials felt charging the women with a hate crime was warranted because they allegedly burnt it “with discrimination or malice toward a particular group, or someone’s belief,” the Baltimore Sun reported.

Other charges the girl’s face—including malicious burning, destruction of property, and trespassing—have not been dropped, the district court clerks said.

David Rocah, a senior staff attorney at the Maryland chapter of the American Civil Liberties Union, told the Daily Dot in a phone interview the charges were “nonsensical.”

“There is nothing in the charging documents that these women—if they committed this crime—did this because Donald Trump is white,” he said. “That’s something that can’t be assumed.”

Rocah said the Princess Anne Police Department should have “remedial education” on what constitutes a hate crime and do some “soul searching.”

The son of the sign’s owner, Jamie Wink, told the Baltimore Sun that the sign drew attention from people in Princess Anne.

The sign is a large version of the “Make America Great Again” signs President Donald Trump campaigned with. It is affixed to a sign supporting Kathy Szeliga, a Republican state senator.

Photos of the aftermath of the fire show burn marks on Szeliga’s sign, but the Trump sign does not appear to be severely damaged.