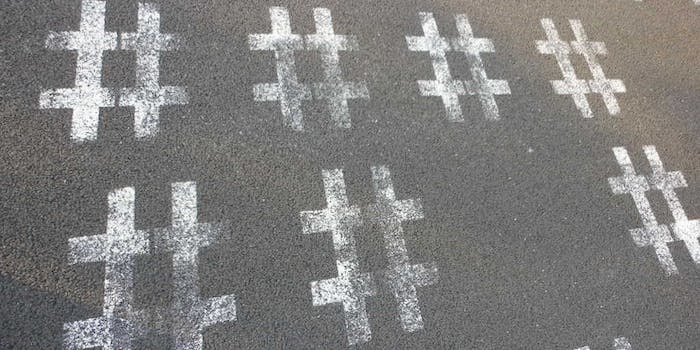 There are times when programming and culture hold hands, their fingers intertwining and the sweat of their individual palms mixing into one warm, harmonious puddle. Such a thing happened on Nov. 8 at Hack Holyoke, a hackathon hosted by Mount Holyoke College, when four men sent the world’s first tweets via a pair of gloves:

how should we still gloves

little boy on a deer it's cold outside

The gloves prompt a voice dictated-tweet when the hashtag hand symbol is made with the wearer’s hands. “There’s conductive fabric on the tips of the fingers, and we put a voltage across them,” Byron Wasti tells the Daily Dot. “And then you just short it, and it detects when you short the signal. It’s really basic.

The idea was in-part inspired by the Jimmy Fallon sketch with Justin Timberlake. Some planning had been done in preparation for the hackathon, but you can’t predict genius, and the creators were struck to make the gloves for simple, and rather personal, reasons.

We ready. We in this. We gloves. @HackHolyoke #gloves pic.twitter.com/VcR0cAD3ND

“We were looking at Google’s API, and Twitter’s API… I don’t know how the glove idea particularly came, it was probably cold out,” says Keenen Zucker. “I’m from California, so I’m not used to the cold, and… I thought it was funny to just combine those two ideas… the original idea was for snowboarding. If somebody can’t take their hands out of their pockets, they could use the gloves to say ‘that was a great run’ or something.”

It was 12 hours into the 24 hour hackathon before the group realized they’d been provided a faulty mic and opted to run the Hashtag Gloves straight into a computer. Going forward, they plan on implementing Bluetooth technology and scaling the setup down, ultimately aiming for wireless connectivity to pocketed phones.

“I think it’s still new at the moment,” says Patrick Huston. “For right now, the prototype isn’t very conducive to carrying it around and using it day-to-day.”

The upside is that they estimate the cost of the prototype at around $50, which isn’t a bad start. It may sound like a novelty product, but given the wearables hype and consumer interest in Internet-connected clothing, that low cost could combine to create something people would want to buy. We all know someone who would love to be able to announce they own tweeting clothes that cost less than $100.

hello, how are you? I'm hungry

Photo via mikecogh/Flickr (CC BY SA 2.0)