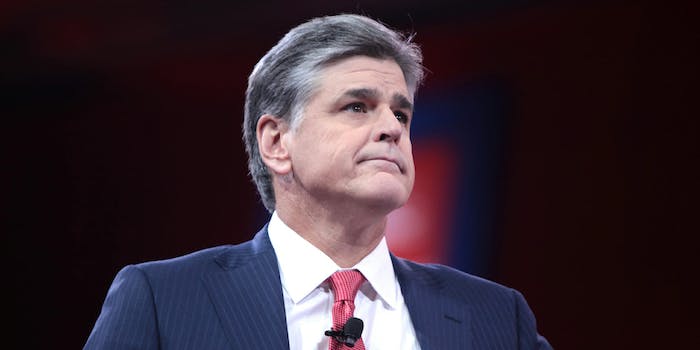 'Going to find out what kind of org Fox is today,' Chuck Todd said on Twitter.

NBC News host Chuck Todd and others questioned the ethics of Fox News and Sean Hannity on Tuesday morning, arguing that the right-wing pundit should not cover Michael Cohen since it was revealed that he had a legal relationship with him.

On Monday, Cohen revealed that he had worked with President Donald Trump, a Republican National Committee official, and Hannity after a judge ordered him to reveal all three clients.

With the news swirling around Cohen, who was raided by the FBI last week, Todd argued that Fox News should not allow Hannity to continue covering the situation.

“Going to find out what kind of org Fox is today. No serious news org would allow someone this conflicted to cover this story,” Todd wrote on Twitter.

Going to find out what kind of org Fox is today. No serious news org would allow someone this conflicted to cover this story https://t.co/8KX1JLlzpx

Todd wasn’t the only one questioning the ethics. The Atlantic said “the ethical implications boggle the mind” in regards to the relationship since the Fox News host had bashed Special Counsel Robert Muller after the FBI’s raid of Cohen. Hannity went so far as to say the special counsel had “declared war” on Trump with the raid.

Todd’s tweet was a springboard for others to question the ethics of Fox News and Hannity covering the Cohen situation.

We know what kind of org Fox is: They allowed serial sexual harassers to lead the company for years, paying women millions to keep quiet. They haven't done anything about the fake Seth Rich story. They'll do something when it hurts the bottom line. https://t.co/gt0DM3d4fx

We’ve known for years what type of organization they are. https://t.co/uTIOmYXwdN

“going to find out”

Because right up until today, everyone thought they were real respectable-like. https://t.co/U1xp5BecAa

“I really think you should have disclosed your relationship with Cohen when you talked about him on this show,” Dershowitz said. “You could have said just that you had asked him for advice or whatever. I think it would have been much, much, better had you disclosed that relationship.”

In response, the Fox News host said his relationship with Cohen was “minor” and said it “had to do with real estate.”

Alan Dershowitz (!) says that Hannity should have disclosed that he was a client of Cohen before discussing the FBI raid last week.

Hannity responds: "I have the right to privacy." pic.twitter.com/lheMdQWqHl

“It’s perfectly logical to think that if you’re friendly with somebody, that you might ask him for legal help,” host Brian Kilmeade said.

“Michael Cohen never represented me in any legal matter,” he said. “I never retained his services. I never received an invoice. I never paid Michael Cohen for legal fees. I did have occasional brief conversations with Michael Cohen—he’s a great attorney—about legal questions I had.”