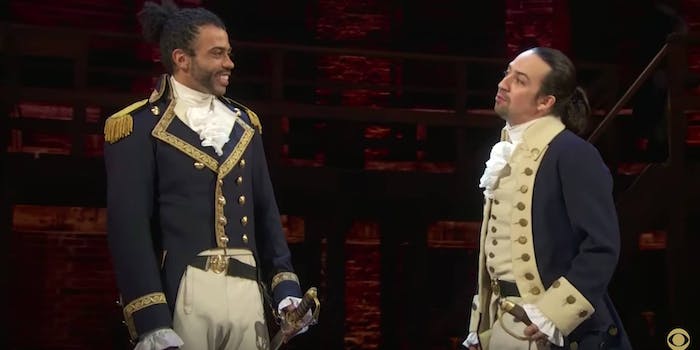 'Hamilton' is with her.

The cast of Hamilton is preparing for a very special sold out show at the Richard Rodgers Theater on July 12. Though creator Lin-Manuel Miranda and fellow superstars Leslie Odom, Jr. and Phillipa Soo are set to leave production mere days before, Hamilton is nonetheless preparing for a whole lot of fanfare.

The reason? Hillary Clinton is holding a major fundraiser featuring a performance of the Tony award-winning musical.

You'll tell the story of your night at @HamiltonMusical with Hillary. Enter to win here: https://t.co/MO6hkcxf8A pic.twitter.com/whfzT5tdfv

Tickets start at $2,700 for a general seat and go all the way up to the lucrative $100,000 event chair level. Those willing to fork over six figures will receive two premium seat tickets, an invitation to the wrap party, and a spot at the Democratic National Convention.

Since gaining prominence, Hamilton tickets have been notoriously hard to come by. For fans of both the musical and the presumptive Democratic nominee, there’s a bit more hope. Clinton has launched a ticket contest to send entrants and a guest to her July 12 fundraiser. The prize includes roundtrip airfare as well as a one night stay at a hotel.