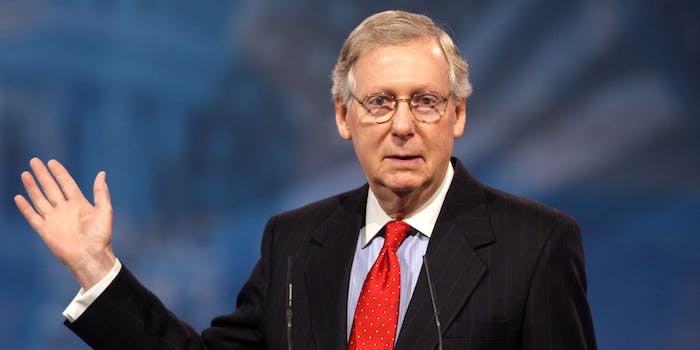 The ads urge the senators to 'stand up to the gun lobby' and pass gun reform laws.

A series of television ads from an advocacy group are calling on a number of Republicans to “stand up to the gun lobby” and pass gun reform laws.

“It seems like every day there’s another shooting. This isn’t normal. It’s time our elected officials did something about it,” the ad targeting McConnell says. “Tell Mitch McConnell to stand up to the gun lobby and pass bipartisan background check and Red Flag laws to keep guns away from people who pose a danger to our communities.”

The Washington Post notes that Everytown for Gun Safety is spending $350,000 on the ads that will run on morning news shows and local broadcasts in Kentucky, Florida, and Colorado.

Earlier this year, the House of Representatives passed a background check bill that is awaiting action from McConnell in the Senate.

The ads targeting Scott, Rubio, and Gardner are similar, adding their names into the script.

Last week, a plan from March for Our Lives, a gun reform organization founded by the survivors of the Parkland shooting, was published by the Washington Post.

Called “A Peace Plan for A Safer America,” the plan includes six points of gun law reform, including banning assault weapons and high capacity magazines, promoting red flag laws, and raising the purchase age of firearms to 21, among other things.