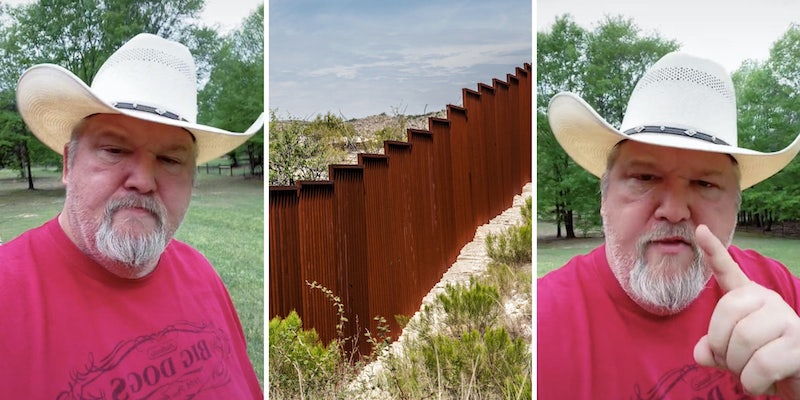 ‘They can’t get one f*cking truck through’: TikToker accuses Texas Gov. Greg Abbott of blocking border trade on purpose

'Sabotaging the economy and gloating about it.'

A TikToker has gone viral by accusing Texas Gov. Greg Abbott (R) of intentionally blocking trade at the Mexican border. He believes it’s part of a Republican plot to hurt Democrats in the midterm elections by increasing inflation.

Last week, Abbott enacted a policy requiring the state to inspect trucks crossing into the United States. Federal officials already inspect trucks that cross the border. The second round of state inspections has significantly increased trucks’ wait times to get into the U.S. Many carry perishables, such as fruits and vegetables.

Mexican truckers protesting the rule have blocked one border crossing. Some companies are rerouting trucks hundreds of miles to cross into Arizona, which is also contributing to delays.

John Esparza, president of the Texas Trucking Association, told the Washington Post, “We are seeing delays that will be felt across the country.” Esparza said that the items impacted range from food and household goods to forestry, commodities, and more: “This is about General Motors, Ford, and everything coming out of Mexico, our trade partner.”

Abbott claims the inspections are necessary to stop drugs and human trafficking.

TikToker @paultx980 (“Paul”) argues that Abbott’s simply trying to score a political win. Paul, whose describes himself as a “patriot” and “liberal” in his bio, has gone viral with a fiery TikTok accusing Abbott and Republicans of hurting Americans to increase their chances in the midterms.

Paul said Abbott is requiring the Texas officials to stop “every single truck” coming from Mexico for a “safety inspection.”

“Why? They want to drive up inflation because they think it will help them in the fucking midterms. …They’re doing it on purpose to hurt you, your family, your wallet.”

Paul then blasted national media for insufficiently covering the situation and urged people to follow local Texas media in cities like Houston, El Paso, and Laredo.

“Laredo is the largest land port in this country and they’ve got it backed up so fucking far you can’t even see the end of the fucking line,” Paul said.

“These are the sorriest motherfuckers in the world. Republicans are traitors. They don’t care who they hurt … just so they can get some power.”

Paul didn’t immediately respond to an interview request posted in a comment on the TikTok. The TikTok has racked up nearly 275,000 views in the 24 hours since he posted it.

His accusations resonated with many. “They are sabotaging the economy and gloating about it,” wrote one.

A person who describes themself as a truck driver commented to say that they’re in Laredo and their “returning trailers are stuck in Mexico. Terminal yard is almost empty.”

Another wrote, “Abbott doesn’t really give a damn about immigrants. His whole deal is to make it look like inflation is the Dems’ fault to get reelected.”

Paul’s TikTok made its way to Twitter, where thousands more viewed and interacted with it.

“This is 100% correct,” opined one. “Greg Abbott is committing economic terrorism against the truckers, workers and consumers of the U.S.”