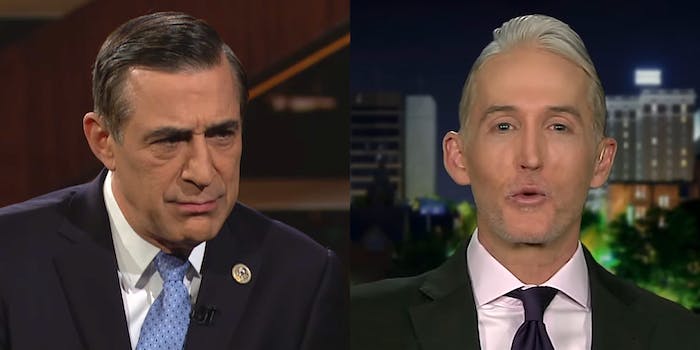 With Gowdy retirement, the Benghazi Boys are officially leaving Congress

Wednesday afternoon, Rep. Trey Gowdy (R-S.C.) announced that he would not seek reelection this year. Gowdy is far from the first House Republican to say he wouldn’t run in 2018, but he is one of the most prominent. And alongside Rep. Darrell Issa (R-Calif.), who announced his retirement last month, and Rep. Jason Chaffetz (R-Utah), who hightailed out of Washington this spring, it marks the end of an era of Congress.

Issa, Gowdy, and Chaffetz all entered Congress at different times, but they coalesced around a singular idea: Hillary Clinton’s guilt in the Benghazi attack.

For those who have forgotten the attack in Libya and the ensuing five years of drama, on Sept. 11, 2o12, a U.S. diplomatic mission and CIA compound were overrun by insurgents in the seaside town of Benghazi. Four Americans died, including ambassador Chris Stevens. Republicans in Congress settled instantly on who was responsible: Obama’s secretary of state, Hillary Clinton, who was already the presumptive 2016 Democratic nominee.

At the time, Issa was chairman of the Committee on Oversight and Government Reform, and he almost immediately threw his committee into investigating the matter, holding a hearing less than a month later titled “The Security Failure of Benghazi,” where State Department officials were called to testify.

In that hearing, both Chaffetz and Gowdy took the opportunity to raise their profile. Issa began the hearing by thanking Chaffetz for being the one who “first began this investigation,” and Chaffetz opened up questioning by calling the investigation into Benghazi a “moral imperative.”

“I believe we have a moral imperative to pursue this. We have four dead Americans. We have others that are critically injured. This is a very serious situation. We have to understand how we got her.”

Gowdy, in particular, led a fiery charge against the State Department about the deteriorating security situation leading up to the attacks. But for all their grandstanding, it was revealed that security lapses around the embassy were due in part to budget cuts at the State Department, which Chaffetz and Issa supported, as noted in a New York Times editorial at the time:

But as part of the Republican majority that has controlled the House the last two years, Mr. Issa joined in cutting nearly a half-billion dollars from the State Department’s two main security accounts. One covers things like security staffing, including local guards, armored vehicles and security technology; the other, embassy construction and upgrades.

Chaffetz even went on TV right before the hearing and said he was fine with cutting the budget for the State Department.

Getting egg on their faces was a frequent occurrence for Issa, Gowdy, and Chaffetz in their investigation into Benghazi, which ended in bumbling embarrassment. At one point, Issa went on national TV and accused Clinton of lying about signing off on a diplomatic cable about security at Benghazi. She hadn’t.

But the failure at Oversight Committee wasn’t enough. After Issa’s investigation ended, House Republicans pushed for a special committee to investigate Benghazi, which Gowdy was put in charge of. In the run-up to the committee being formed, Chaffetz and Gowdy started explicitly placing the blame on Clinton.

On Fox News, in January 2014, after a New York Times article on what happened at Benghazi, Gowdy accused the paper of minimizing Clinton’s role to pave the way for an election win in 2016.

“I have read this New York Times article six times. I want you to read it six times and tell me if you can tell who the secretary of state was when Benghazi happened. Because her name wasn’t mentioned a single solitary time in this exhaustive New York Times piece. Not once.”

Chaffetz blamed Clinton for keeping security at a minimum to give off the appearance of success in the U.S. mission in Libya.

“The bottom line is Hillary Clinton wanted the appearance of normalization [in Libya],” Chaffetz said. “Security was not driving these decisions. Politics was.”

Gowdy’s investigation culminated in a widely televised 11-hour grilling of Clinton, but it was another action months earlier that would be the anchor that tied them to Clinton’s 2016 candidacy. In February of 2015, while investigating Clinton, the committee discovered her private email server, a story that subsequently made its way into the New York Times.

When the committee finally issued its findings in June, in the middle of the 2016 election, it found the State Department did not adequately protect its diplomats in Libya and said Clinton should have been aware of the security lapses and taken measures to improve the situation.

But the real goal it accomplished was in damaging Clinton. Issa even said so. “You know, people often ask Trey Gowdy and myself, what did our investigations do? Well, what they did is that they opened up an opportunity for the American people to sort of smell what’s in the garbage can,” Issa told Boston Herald Radio in January 2016. And I think that’s the reason that a devout socialist who wants to nationalize almost everything in America is close to and probably will beat Hillary [in the New Hampshire primary].”

Gowdy continued a campaign against Clinton after his report was issued, going on Fox to call her a “habitual, serial liar.”

Chaffetz, for his part, had said he was looking forward to investigating Clinton from “Day One” and that he had two years’ worth of investigations lined up should she win the presidency.

But she lost. And with their biggest cause in Congress gone and, with it, the only foil they have really ever known, the Benghazi Boys are all heading home.