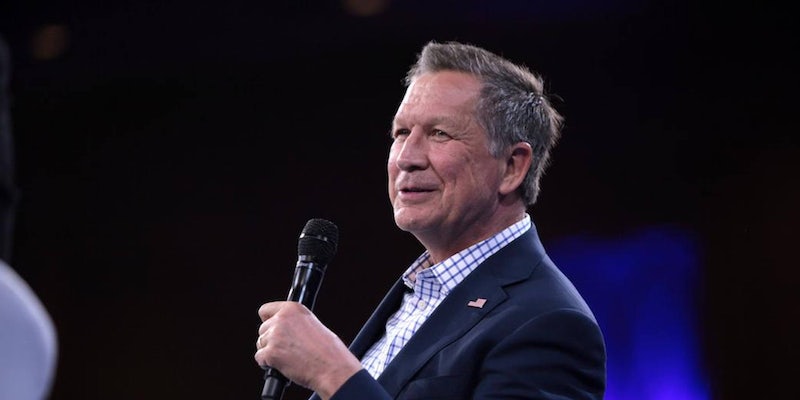 Republican presidential candidate John Kasich has had a relatively simple job of showing America he isn’t as polarizing as Donald Trump. But after today’s town hall in Watertown, New York, we’re not so sure.

On Friday, the Ohio governor shared his two cents on how women can feel protected against sexual assault, advising one woman, “Don’t go to parties where there’s a lot of alcohol.”

Kasich’s advice came in response to a question posed by the woman, a first-year student at St. Lawrence University in Canton, New York: “What are you going to do in office as president to help me feel safer and more secure regarding sexual violence, harassment, and rape?”

His entire response wasn’t as jarring as his last shred of advice. Kasich that Ohio believes female college students should know upon enrollment that they have resources available to them to “pursue justice” in the case of a sexual assault.

But it’s where he begins to vaguely mention that “coeds” should have the opportunity to know the rules, opportunities, and confidential policies so they are “not vulnerable, at risk, and can be preyed upon,” that Kasich’s words veer into questionable victim-blaming territory.

According to CNN, the Democratic National Committee criticized Kasich in a statement, saying he was “blaming victims of sexual and domestic violence,” and that, “it is no wonder women are turning away from the Republican field in huge numbers.”

According to a survey published by the Association of American Universities, 23 percent of undergraduate women reported experiencing a sexual assault since enrolling in college, and according to the National Institute of Justice, one in five female students will be sexually assaulted during their time at a university.

With the national conversation on college sexual assault changing, Kasich’s words of wisdom come off as antiquated and unreasonable—shifting the blame from the predator taking advantage of an inebriated classmate to the prey daring to have a drink.

But hours after his statement, Kasich’s Twitter account backpedaled in a barrage of tweets, clarifying that only the assailant is responsible in a sexual assault, and that Kasich has done wonders for sexual assault survivors on college campuses.

Only one person is at fault in a sexual assault, and that's the assailant. 1/3

That's why John Kasich has worked so hard to provide campuses with the tools they need to make sure victims have the necessary support. 2/3

Victims needs to know we're doing everything we can to have their backs, and that's happening in Ohio under John Kasich's leadership. 3/3

And also, did you hear about the time that…?

And did we fail to mention that…?

Oh, and in case you’re not convinced…

Glad to know Kasich hears women after they have spoken out.