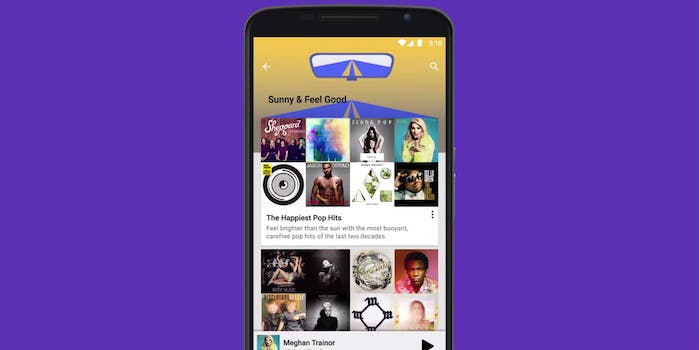 Google gets in on the radio game.

As Apple Music‘s launch draws ever closer—and eleventh hour changes come thanks to pressure from the world’s biggest pop star—the streaming-music world is trying harder and harder to beat Apple before it can find its footing.

The latest move in this industry-wide jockeying for position comes from Google, which announced on Tuesday that it will start offering free, ad-supported radio stations through its Google Play Music app.

Google Play Music, the oft-forgotten streaming service from the search giant, will let U.S. users listen to its entire 30-million-song library for free, albeit in a limited fashion. Free ad-supported radio stations will be available by genre, mood, decade, or activity. The curated playlists will be built by Google’s music experts and the creators of Songza, the music recommendation service that Google bought last year.

Users will also be able to build stations based on their favorite albums, artists, or songs, in a system similar to what Pandora offers.

While Google does offer an ad-free, on-demand streaming service for $10 per month, Google Play Music’s free radio service hews more closely to the likes of Pandora and Rdio. The proximity of its release to the launch of Apple Music and its anticipated Beats 1 radio service makes it hard not to draw comparisons.

Apple placed significant emphasis on the fact that its radio stations will be curated by on-air DJs who hand-pick tracks and play them for listeners. A Google spokesperson told the Daily Dot that Google Play Music’s radio service will include manually curated stations built around themes and algorithmically generated ones built around genres and artists.

A Google spokesperson noted that artists can get paid through through Google Play Music in a variety of ways: the new ad-supported radio service, on-demand streaming, and plays from the free-to-use locker service. Google Play Music lets people store up to 50,000 songs from their own collection in the app, but Google pays royalties to the rightsholders for those songs.

Google Play Music’s free radio platform is rolling out on the Web today and will make its way to iOS and Android users later this week.