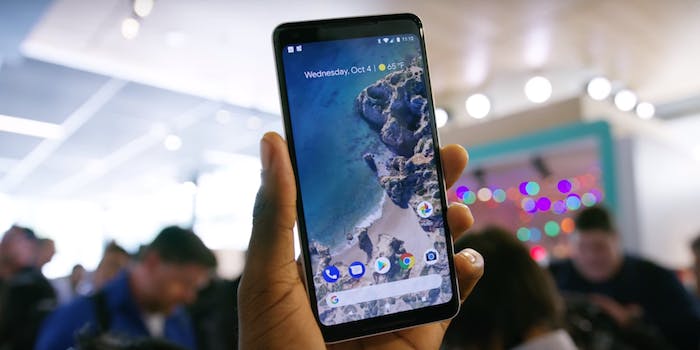 'Burn-in' is the latest problem plaguing the device's OLED panel.

Google is launching an investigation into its flagship Pixel 2 XL smartphone after yet another display problem was discovered.

Alex Dobie at Android Central tweeted a picture of his device’s OLED display exhibiting what appears to be burn-in—a ghosted image visible when a display gets permanently imprinted.

That's some pretty wild OLED burn-in on the Pixel 2 XL after maybe 7 days of full-time use pic.twitter.com/EPJTs6D0Kg

As you can see, a faded outline of the navigation bar is still visible after Dobie pulled up a grey background over it. The navigation buttons (back, home, and tabs) on Android devices remain at the bottom of the display until a user plays full-screen content, like games or videos.

We replicated this test with a review unit provided to the Daily Dot but did not see any ghosting on its 6-inch LG-made P-OLED panel. The problem does not exist on the Pixel 2, which uses LCD technology.

Burn-in is a well-known shortcoming of OLED displays. But like the Plasma TVs that were popular in the early 2000s, it should only become visible after years of use, not days. It’s possible the problem we’re seeing here is actually image retention, a short-term version of burn-in commonly found on LCD displays. Regardless, an $850 flagship phone should not be suffering from hardware issues days after launch.

Google defended itself and said it would investigate the problem in a statement to the Verge.

“The Pixel 2 XL screen has been designed with an advanced POLED technology, including QHD+ resolution, wide color gamut, and high contrast ratio for natural and beautiful colors and renderings. We put all of our products through extensive quality testing before launch and in the manufacturing of every unit. We are actively investigating this report.”

The search giant unveiled the follow-up to its highly praised flagship smartphone earlier this month. While it received high marks for its excellent camera and fluid UI, reviewers have slammed it for numerous display issues, including poor white balance, color shifting, and muted colors.

We will extensively test our Pixel 2 XL for burn-in and any other display problems and include the results in a full review.