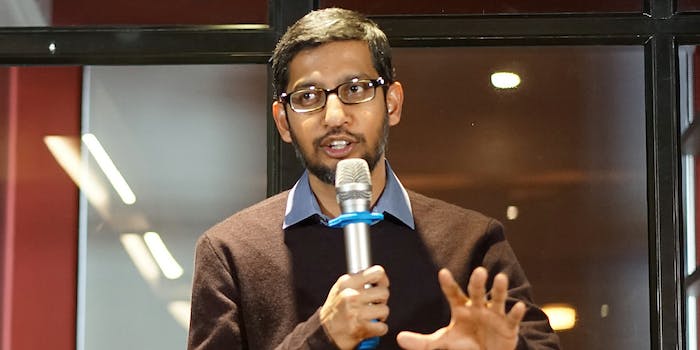 The tech giant will be questioned amid numerous scandals.

Google CEO Sundar Pichai is set to testify before Congress next week amid numerous scandals surrounding the tech giant.

As first reported by the Washington Post, Pichai will appear in front of the House Judiciary Committee on Dec. 5 to face questions on a litany of issues.

Pichai drew the ire of lawmakers last September after failing to join a congressional hearing attended by the CEOs of Facebook and Twitter.

While next week’s hearing was reportedly sparked by Republicans who have accused Google of being biased against conservatives, Pichai is expected to be met with inquiries on everything from data privacy to its dealings in other countries.

One such issue is Google’s Project Dragonfly, a censored search engine created at the behest of the Chinese government. In an attempt to reenter the Chinese market, Google has designed the search app to blacklist certain terms including “Nobel prize” and “human rights.”

The controversial plan has led to widespread protest, resignations, and condemnation from politicians and human rights groups alike.

Google also faced heavy criticism after it was revealed that it had been aware of a flaw in the Google+ social network that exposed nearly half a million users’ data. The tech company, which opted to keep the issue hidden from the public, responded by shutting down the service.

The company has also seen thousands of its employees stage walkouts in response to the mishandling of sexual harassment allegations at Google.