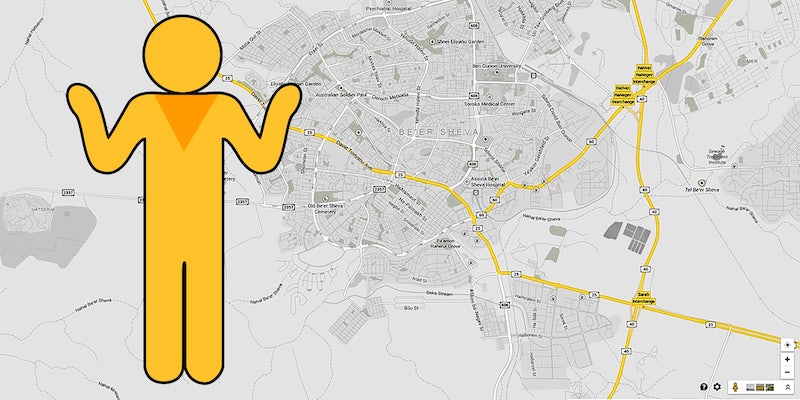 When following the blue line can cost you your life.

Remember when, in May 2013, Google “recognized” Palestine? In one fast Web edit—changing the text of its Palestinian homepage from “Palestinian territories,” to “Palestine”—Google rocketed Palestinian statehood into unprecedented reaches.

So why is Google getting Palestine so wrong now?

The West Bank’s administrative center, Ramallah, featured prominently this year, in part due to Secretary of State John Kerry’s seemingly endless visits there during the doomed peace negotiations with Israel.

Nablus, in northern Palestine, developed a more ominous reputation during the early 2000s and the Second Intifada. It was bastion of violent resistance—Nablus allegedly groomed more suicide bombers than the Palestinian resistance could wittingly deploy.

So if you want know how Google’s mapping of Palestine is strangely sinister, just ask it for directions between Ramallah and Nablus.

The first difficulty you’ll encounter is finding the maps for the correct “Ramallah” and “Nablus.” Before Google Maps’ search autofill locates these Palestinian towns, you’ll be directed to places like “Ramallah Supermarket, Jordan,” a municipal playground, or “Ramallah Road, Jacksonville, Florida.” You’ll get there eventually, but the ambiguity is perturbing—by Google’s standards, locating and prioritising urban areas and roads is pretty basic stuff.

Maps estimates it will take about three hours and 32 minutes to drive between Ramallah and Nablus. The journey Maps recommends requires you to circumnavigate much of the West Bank. There’s an alternate route, but it isn’t any better—much worse actually. This route, which sends you around the Jordanian side of the West Bank, will take four hours and 59 minutes. 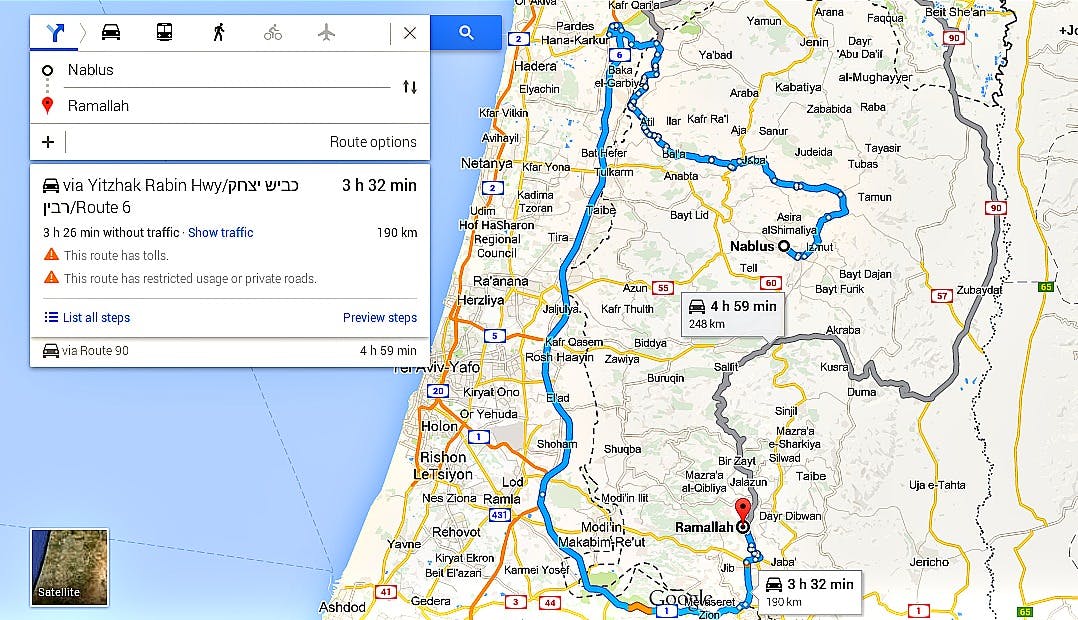 Looking at the map here, doesn’t it seem like there should be a road direct between Ramallah and Nablus? Well, there is, just not according to Google.

Anyone who has made the journey knows it takes about 45 minutes—not four hours, not five—to get between the towns. And depending on how recklessly and manically your driver takes the many mountainous bends, you might even make it in 40. Most people make the trek in taxi that looks something like the one below—your driver might even be that old bearded guy. It’ll cost you 17 New Israeli Shekel (NIS), the equivalent of about five bucks, which all is to say: Google’s calculations are way off. 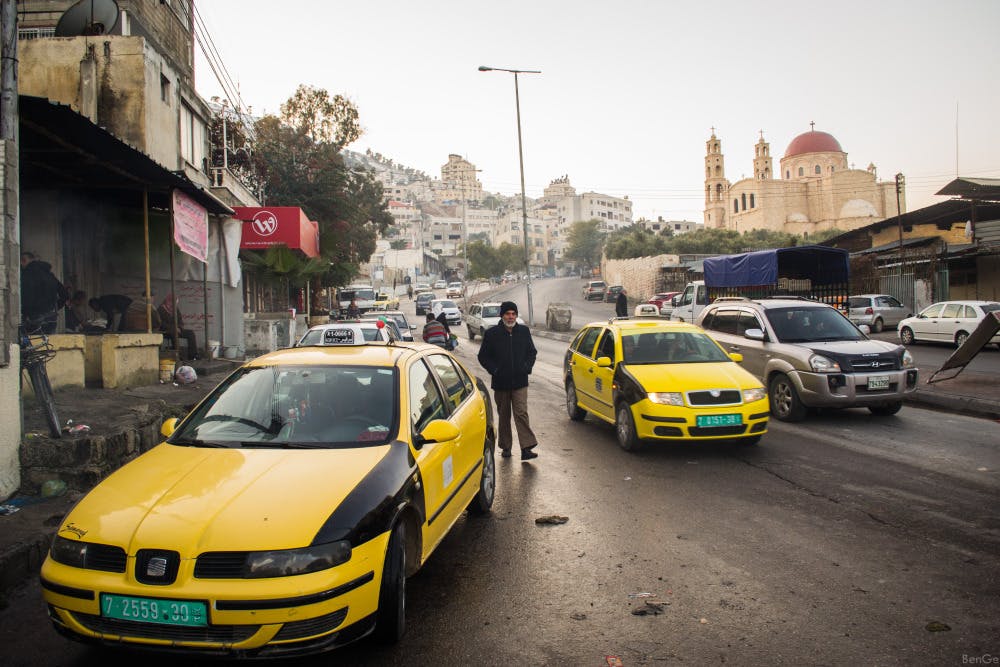 Below the directions is a small warning: “This route has restricted usage or private roads,” which is putting it lightly. In reality, half of the roads featured on this map are totally inaccessible to Palestinians, and the other half are inaccessible to Israelis, which, ultimately renders it useless to the majority of people who might want to use it.

If you’re Palestinian, to travel on Google-endorsed roads, you’ll need to secure a series of permits and agreements, which the Israeli authority now hands out less frequently with each passing year. Exceptions might be made for a journey to Jerusalem, for prayers at Al Aqsa, but probably only during Ramadan. The Israeli Defence Forces (IDF) calls some roads in this network “sterile roads.” For Palestinians, use these are prohibited entirely.

If you’re Israeli, you’ll encounter a sign, near both Ramallah and Nablus, which warms, “This Road leads to Area ‘A’ Under the Palestinian Authority. The Entrance For Israeli Citizens is Forbidden, Dangerous to Your Lives and Is Against The Israeli Law [sic].” 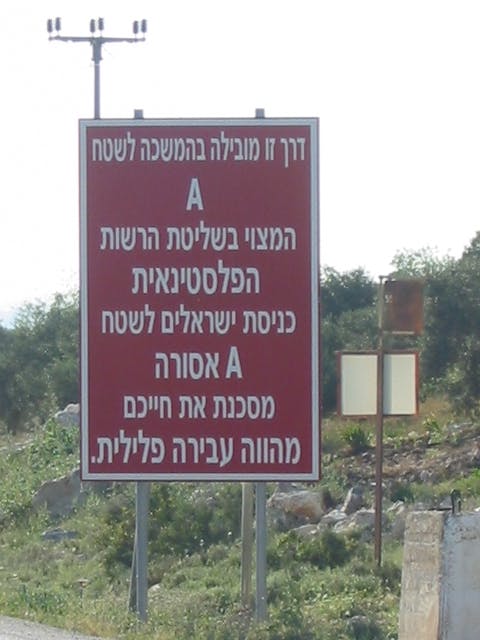 In short, if you have ample time to spare, or you’re feeling like embarking on journey that may be illegal or “dangerous to your life,” use Google Maps in Palestine.

That’s not all though. And here’s where it gets uncomfortable: The roads Google Maps recommend are part of a network that human rights organizations point to as evidence of apartheid in the region.

B’Tselem, the Israeli Information Center for Human Rights in the Occupied Territories, says Palestinians’ access to roads in the West Bank is unambiguous, “The roads regime [in the West Bank], which is based on separation through discrimination, bears clear similarities to the racist apartheid regime that existed in South Africa until 1994.”

“This policy is based on a racist premise: That all Palestinians are security risks, and it is therefore justifiable to restrict their movement. Thus the policy indiscriminately harms the entire Palestinian population, in violation of their human rights and of international law.”

Google’s suggested route isn’t just misleading—it’s potentially illegal and life-threatening. Worse, it seems insensitive to the human rights of Palestinians in the West Bank. Why Google can’t recommend the much simpler route—or a rendering of Palestine—that avoids this cloud of complication remains unknown. At the time of publication, a representative from Google could not be reached for comment.