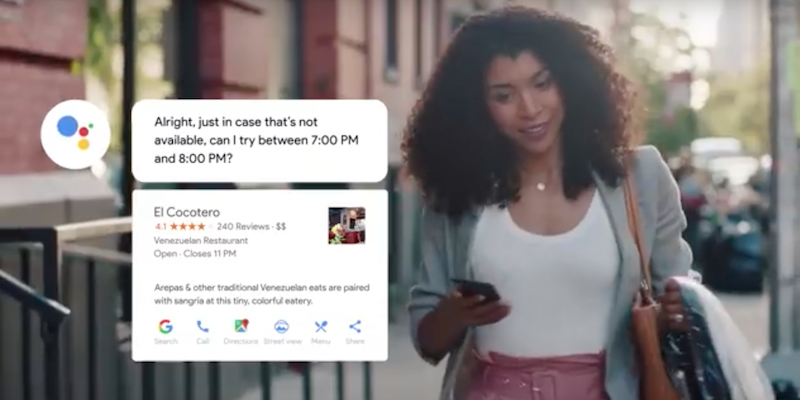 Google Duplex is Google’s voice-based AI for “accomplishing real-world tasks” over the phone. Until now, Google has primarily touted Duplex as a service for consumers, but a recent report suggests that Duplex could handle calls on the other side of the line too.

While Google Duplex will soon let you inquire about business hours, make restaurant reservations, and make hair appointments, The Information reports that Google could also make its way into call centers. Several notable companies are in the early stages of testing out Google’s AI to replace call center or telemarketing-style work done by human employees, according to the Information. In particular, an unnamed insurance company is interested in using Duplex to handle simple customer service-related phone inquiries.

In a statement to Gizmodo, Google said it was focused on consumer applications of its Duplex technology, rather than enterprise scenarios:

We aren’t testing Duplex with any enterprise clients. Duplex is designed to operate in very specific use cases, and currently we’re focused on testing with restaurant reservations, hair salon booking, and holiday hours with a limited set of trusted testers. It’s important that we get the experience right, and we’re taking a slow and measured approach as we incorporate learnings and feedback from our tests.

If Google does head into the enterprise space, it could be profitable—although it could also potentially put a number of Americans out of jobs. According to the Bureau of Labor Statistics, more than 189,000 people are employed as telemarketers in the U.S. The cloud-based call center market, meanwhile, is growing to be a $21 billion industry over the next four years, according to ResearchAndMarkets.

Duplex could feasibly take on this work though if Google eventually went into the enterprise arena. In a call center scenario, a Duplex-AI could handle simple queries, passing off more advanced or tricky questions to human workers. Or it could leave a near-incalculable amount of people around the world jobless as American companies with call center operations overseas slowly pivot to AI.