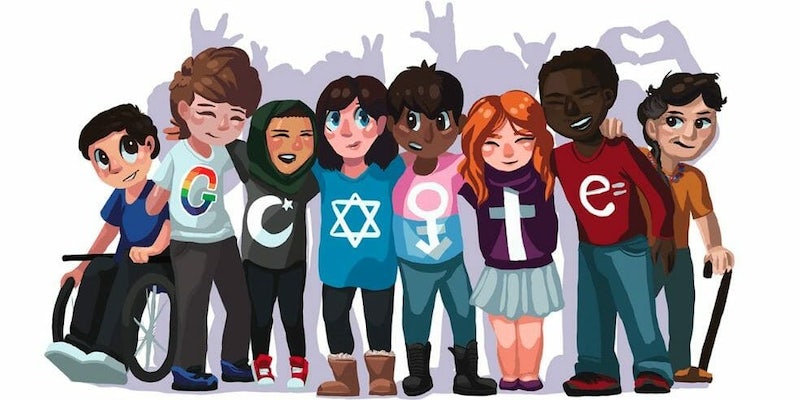 Doodle 4 Google contest winner gives us hope for the future

This heartwarming image signals a bright future for humankind.

A 15-year-old high school student won the ninth-annual Doodle 4 Google content. The winning entry, “A Peaceful Future,” depicts a future of acceptance between people from all walks of life.

Sarah Harrison, a 10th grader from Connecticut, will be given a $30,000 scholarship, Chromebook, Android tablet, and a trip to Mountain View to visit Google’s headquarters. Her school will be given $50,000 to spend on technology and support STEM programs.

“My future is a world where we can all learn to love each other despite our religion, gender, race, ethnicity, or sexuality,” Harrison told Google. “I dream of a future where everyone is safe and accepted wherever they go, whoever they are.”

Harrison’s doodle went live on the Google homepage on Friday. The popular web browser’s first image appeared in 1998. It has since expanded the program, and regularly replaces the standard “Google” text with a timely Doodle.

This year’s Doodle 4 Google competition started in September and asked contestants to draw an image for “What I see in the future.” Harrison beat out hundreds of thousands of other contestant. Four other finalists will be given $5,000 and a trip to visit the folks who draw Google’s doodles.

Here are the doodles from the other four national finalists: