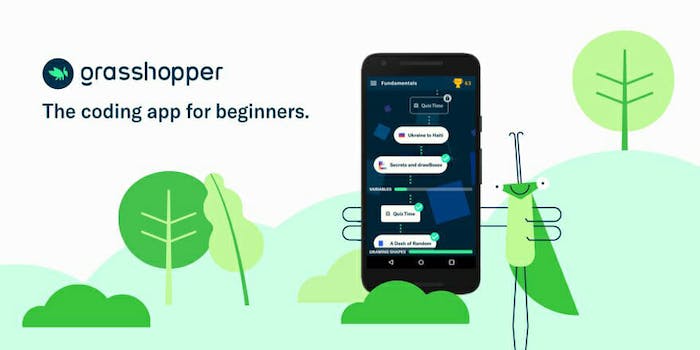 Learn to code JavaScript for 5 minutes a day.

Smartphone owners who want to learn how to code can learn the fundamentals with Google’s new app, “Grasshopper,” which launched Wednesday.

The app is Codeacademy meets DuoLingo. Users learn JavaScript coding basics by playing quick games and puzzles, moving through progressively more challenging levels as they develop their abilities and collecting achievements as they learn new skills.

“Coding is becoming such an essential skill, and we want to make it possible for everyone to learn even when life gets busy,” the app’s website says. “We made Grasshopper to help folks like you get into coding in a fun and easy way.”

Laura Holmes, a senior product manager at Google, founded Grasshopper as part of Google’s Area 120, an internal incubator that works on special projects. She explained how the app works to TechCrunch.

“Each coding puzzle has the student writing real JavaScript code using a custom built code editing environment. The student is given a challenge, and the user has to solve it using code, but it only takes a few taps to write out,” she says. “Each time the student runs code, they’re given real-time feedback to help guide them towards solving the challenge. Many students have told us that this real-time feedback feels like a tutor, since the feedback feels so tailored to the student’s current state.”

Welcome to the world, Grasshopper! I couldn't be prouder of the team and what we've built. Download at https://t.co/N2Y1OcgpVs if you want to start learning to code in 5 min a day #learntocode #reskilling #edtech #grasshopper https://t.co/QN7V2sepMb pic.twitter.com/HOqVl5mGHj

Eventually, Holmes and her team plan to expand the curriculum by adding more content to the fundamentals section and a new course to the app. She said the team does not plan to build curriculum beyond coding JavaScript, however.

So far, the app has 4.7 stars and quite a few positive reviews from both experienced and non-experienced coders.

Grasshopper is a new app for learning to code Javascript. It has excellent, easy-to-follow tutorials. I'm a big fan. It's probably one of my five favorite new apps this year. https://t.co/szps7VA4jN pic.twitter.com/goC4VB2ZvW

This is really cool! Students can learn to code from an app that gives them challenges! Check out https://t.co/tStuEsuf2W from @Google's Area 120! Its available on both Android (Chromebooks with Android) and iOS! #michED #edtech #INeLearn #BRESA

Some reviews have been more critical of the app, saying the only way to truly master coding is to simply code. Holmes and her team, however, have made it clear that Grasshopper is only intended to teach fundamentals and inspire new people to continue learning.

“We see Grasshopper as a launchpad to help introduce people to code. For one-third of our users, Grasshopper is the first time they’ve ever encountered coding,” Holmes said. “Many people think that coding isn’t for them or don’t have the access and time needed to consider it as a viable career path, and we want to help change that perception.”

There are already more than 5,000 graduates from Grasshopper’s program, according to TechCrunch. Out of all the players, 47 percent were students from backgrounds that are traditionally underrepresented in tech, and 68 percent of users said they’re more motivated to learn to code after using Grasshopper.