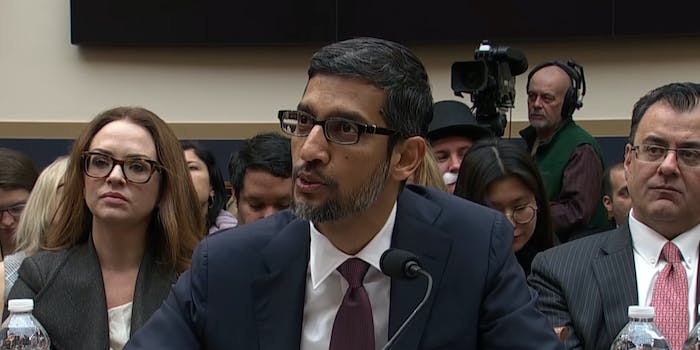 DOJ calls on courts to break up Google in antitrust lawsuit

Is Google a monopoly?

The Department of Justice (DOJ) on Tuesday filed an antitrust lawsuit against Google, alleging that the company has a monopoly over online search and used anticompetitive practices to maintain that status. In the suit, it called on the court to bring “structural relief” on the search giant, essentially asking for the company to be broken up.

Eleven states have signed on with DOJ in the suit.

The suit serves as one of the largest pushes against the tech industry in decades and has been long-anticipated.

DOJ alleges that Google pays partners to keep other search engines off their browsers and devices, and through these arrangements has managed to grab hold of 80% of all search in the U.S.

In the lawsuit, DOJ called Google a self-reinforcing monopoly, where it takes in gobs of revenue, then pays it out to distributors to help keep Google as the default search engine. From the lawsuit:

Google monetizes this search monopoly in the markets for search advertising and general search text advertising, both of which Google has also monopolized for many years. Google uses consumer search queries and consumer information to sell advertising. In the United States, advertisers pay about $40 billion annually to place ads on Google’s search engine results. It is these search advertising monopoly revenues that Google “shares” with distributors in return for commitments to favor Google’s search engine. These enormous payments create a strong disincentive for distributors to switch. The payments also raise barriers to entry for rivals—particularly for small, innovative search companies that cannot afford to pay a multi-billion-dollar entry fee. Through these exclusionary payoffs, and the other anticompetitive conduct described below, Google has created continuous and self-reinforcing monopolies in multiple markets.

DOJ also notes that when Google was a startup, it opposed the behaviors of Microsoft, calling the software giant a monopoly that prevented Google from growing. Now, DOJ says, Google uses the same playbook, but having learned from the massive suit against Microsoft, has chosen its words more carefully.

In particular, Google employees were instructed to avoid using terms such as “bundle,” “tie,” “crush,” “kill,” “hurt,” or “block” competition, and to avoid observing that Google has “market power” in any market.

Deputy Attorney General Jeffrey A. Rosen said in a press conference announcing that case that: “For years, there have been broad bipartisan concerns about business practices leading to massive concentrations of economic power in our modern online economy. The antitrust division has been looking at Google and its competitive practices for more than a year now. Google is the gateway to the internet and a search advertising behemoth. Google achieved some success in its early years, and no one begrudges that. But as the antitrust complaint filed today explains, it has maintained its monopoly power through exclusionary practices that are harmful to competition.”

The DOJ calls for Google to “enter structural relief as needed to cure any anticompetitive harm,” and that the court bar Google from engaging in “anti-competitive practices” going forward.