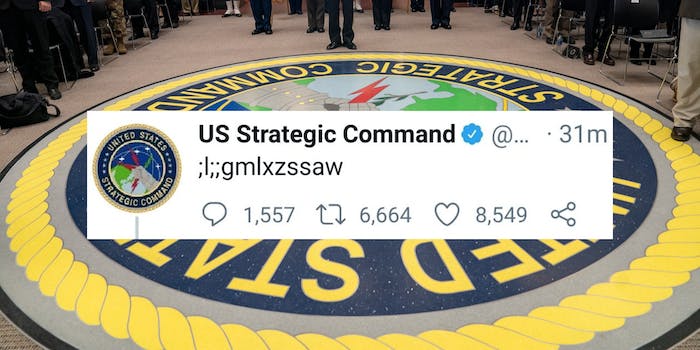 Twitter users jokingly feared that the agency responsible for the U.S. nuclear arsenal had been overtaken.

An unintelligible tweet made by U.S. Strategic Command (USSTRATCOM) on Sunday was produced by a small child, the Daily Dot has learned.

USSTRATCOM, which is responsible for the U.S. nuclear arsenal, stirred confusion after releasing a tweet that appeared to be gibberish: “;l;;gmlxzssaw.”

Given USSTRATCOM’s role, Twitter users began joking that the agency had inadvertently sent out a nuclear launch code. The tweet was even used by followers of QAnon to further their conspiracy theory.

But it turns out the tweet was just an accident. The Daily Dot filed a Freedom of Information Act (FOIA) request with USSTRATCOM and learned that a small child had produced the tweet.

USSTRATCOM’s FOIA officer stated that the tweet had been made when the agency’s Twitter manager momentarily left his computer unattended.

“The Command’s Twitter manager, while in a telework status, momentarily left the Command’s Twitter account open and unattended,” the response reads. “His very young child took advantage of the situation and started playing with the keys and unfortunately, and unknowingly, posted the tweet.”

USSTRATCOM further stressed that the tweet was not the result of a hacking incident.

A PDF version of the agency’s response can be viewed here.