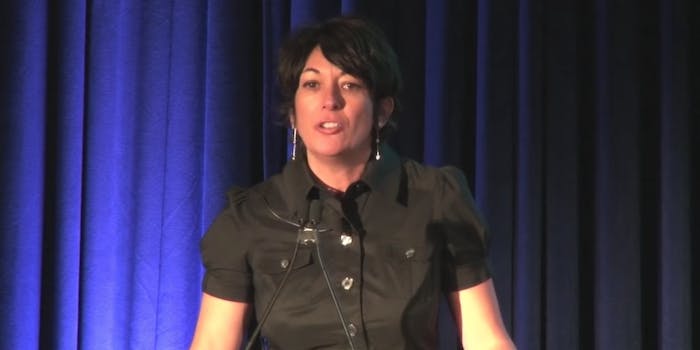 Conspiracy theorists would like to see Ghislaine Maxwell’s mugshot

There's a simple explanation as to why no mugshot has been released.

Conspiracy theorists are convinced that something sinister is afoot due to no mugshot being publicly available for accused sex trafficker Ghislaine Maxwell.

Countless users have been flooding social media over the past few weeks with questions regarding Maxwell, the confidant of deceased convicted sex predator Jeffrey Epstein, and have even suggested that she could be dead.

“Where the hell is Ghislaine Maxwell’s mugshot?” @catturd2 asked last month in a now-viral tweet.

Users also noted that Maxwell’s photograph did not appear to be available online after searching numerous databases.

Some even went as far as to suggest that Maxwell may not have ever been arrested to begin with.

“Is there even 1 picture/video of Ghislaine Maxwell that proves she is in custody? Mugshot? Anything?” @jason_quitt said.

Similar questions are still be asked as of this week, with dozens of users on Twitter seeking answers.

“Can someone please remind me why we all are expected to believe that Ghislaine Maxwell is in custody? Not even so much as a mugshot?” @_WalkHumbly said. “Why did she even come back to the US? Something is really fishy about the whole situation. Do we all just blindly believe the govt all of a sudden?”

As it turns out, the reason for the missing mugshot is far simpler than what conspiracy theorists may want to believe, as is often the case.

In a recent statement to Newsweek, the FBI stated that DOJ policy dictates that mugshots are released only when it serves a legitimate law enforcement purpose.

“We do not release mugshots absent a law enforcement purpose, for example, when a person is a fugitive,” an FBI spokesperson said.

A DOJ source speaking with Newsweek also noted that while a photo of Maxwell does appear in her indictment, it is not the mugshot taken when she was first booked into jail.

The reason why has to due with rules that are designed to keep photographs from influencing a jury. A photo of an individual in custody can sway jurors into developing ideas about an individual’s guilt or innocence.

Maxwell, whose trial is set for July 2021, is currently being held at Brooklyn’s Metropolitan Detention Center.

Maxwell has pleaded not guilty to the charges against her, which include those related to child grooming and perjury.