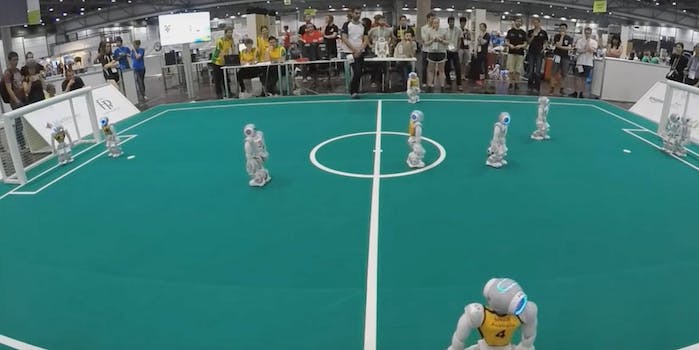 There is no World Cup taking place this year, but soccer fans hoping to see the best in the world go at it can get their kicks from the Robocup, a soccer competition between robots that just crowned a team from Germany as the world champion.

The annual battle for robot soccer supremacy, founded in 1997, placed teams of researchers and developers in Leipzig, Germany, where they participated in a series of competitions that put robot foot skills to the test.

The main event was the Standard Platform competition, which challenges teams all to use the exact same robot—the 23-inch tall “Nao,” an autonomous bot built by French company Aldebaran Robotics —and develop software that allows it to play soccer.

The championship match of the Standard Platform pitted a team of developers from the University of Bremen in Germany going by B-Human against a squad from University of Texas named Austin Villa—a play on the name of professional English soccer team Aston Villa.

Training the robots to play requires giving them the ability to identify the ball and understand positioning on the field. Teams have to equip the machines with advanced computer vision programming that allows them to detect every part of the arena.

The teams placed their bots on the pitch for a five-on-five showdown that took place over two 10 minute halves. The teams clearly did an excellent job programming their bots, as they accurately recreated the typical soccer match by producing a 0-0 draw at the end of regulation.

With no score to speak of, the match was decided on penalty kicks—a one-on-one showdown between a striker and goalie. The German squad managed to knock in all three of its attempts while Austin Villa’s bots missed in three unique ways: one ball went wide of the goal, one was stopped by the keeper, and one was accidentally kicked and resulted in a miss.

The win made good on the old addege from English soccer legend and current commentator Gary Lineker, who once noted, “Football is a simple game; 22 men chase a ball for 90 minutes and at the end, the Germans win.”

More than just living up to Lineker’s quote, B-Human also scored a redemption after falling just short of snagging the title in 2015. The squad made it to the finals but lost 3-1 to a team from Australia.

Organizers of the RoboCup hope that one day it won’t just be bots playing against one another on the pitch; the long term goal is to build bots that can beat human players by 2050. There’s still a long way to go, but there’s also the distinct possibility that by then, robots may have already rose up and taken over and forced humans to play soccer against one another for their entertainment like we did to their ancestors.